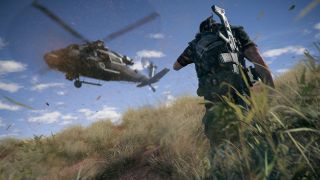 Ghost Recon is back and more expansive than ever. The latest entry in Ubisoft's third-person tactical shooter franchise, Ghost Recon: Wildlands (available now on PS4, Xbox One and PC) is forging new ground for the 16-year-old series by placing it in an open-world setting. The location for this auspicious change takes place in a fictional Bolivia where a violent drug cartel has turned the country into a narco state. You'll be playing as a highly trained special-ops member of a team called Ghosts. Your mission is clear: get rid of the army of criminals by any means necessary.

But before you go shooting up the countryside all willy-nilly, here are some important things you should know.

What's the story about?

In your new role as a Ghost, you'll be hunting down members of the Santa Blanca cartel. Through a series of bribery and brutal strong-arm tactics, Santa Blanca has all but taken over Bolivia, turning it into a narco state. And while gunning down nameless cartel members can be entertaining, the big villain in Wildlands is El Sueño, a tattooed mass of muscle whose cruelty knows no bounds. But before you get to him, it'd be wise to hunt down his lieutenants and generals to weaken his operation.

How big is the world?

It's so big, you guys. But seriously, Ubisoft claims that Wildlands features its biggest open world to date. The world is separated into 21 regions with 11 environments that reflect Bolivia's rich topography and amazing ecological diversity. Ubisoft didn't stop there, however: The company went even further to make sure to fill this gorgeous world with non-playable characters that go about their daily routines regardless of your actions.

What's the best way to play?

However you want. Whether you like to go into a hostile situation guns blazing or send a drone in to scope everything out first, there's no wrong way to play. In fact, if you do enough missions for the local rebels, they'll come in and help you fight some of those tougher battles. But whatever your play style, just have fun with it.

How does the co-op work?

What's better than taking down a dangerous crime syndicate? Taking it down with friends. No matter your skill level or progress in the game, you can jump into a friend's game and lend a friend a hand and vice versa. Even better, if you want to go it alone, you can simply leave your friend's game and return to your own.

How much customization can I expect?

If you like to tweak every little thing about your character, you're going to have a field day with Wildlands. During a previous demo, I got a little taste of the depth of the game's customization, starting with my character. You can choose ethnicity, gender, skin tone, hair and eye color, as well as all your clothing. As you find different gear throughout your adventures, you can even start tricking out your favorite weapons. Want a zebra-striped assault rifle? Knock yourself out.

What are Skill Points, and how do I use them?

Want to improve your drone's battery and wield more powerful weapons? Then you're going to need Skill Points, my friend. The points are awarded by leveling up or interrogating cartel members for secret caches. Be careful when you go to collect, as many of those treasure troves are heavily guarded.

How many versions of the game are available?

In addition to the $59.99 versions available for PlayStation, PC and Xbox One, Ubisoft is offering a few bundles that offer a bunch of game-enhancing goods.

There's the $69.99 Deluxe package, which has additional weapons. You also have the $99.99 Gold Edition, which has everything in the Deluxe pack and throws in a season pass with two expansion packs. But for the big spenders out there, Ubisoft has the $170 Collector's Edition, which comes in a steel case with artwork from the game and a 10.5-inch figure, along with all of the goodies from the Gold Edition.

What do I need to play Ghost Recon: Wildlands on PC?

At minimum, you're going to need a system with Windows 7 SP1, an Intel Core i5-2400S or AMD FX-4320 processor, 6GB of RAM and Nvidia GeForce GTX 660 or AMD HD7870/R9 graphics. But if you're planning to play Wildlands in 4K, you'll need a more powerful system like the Razer Blade Pro or the Origin PC Millennium.

Should I buy Ghost Recon: Wildlands?

Yes! Wildlands basically lets you run around, dropping hostiles like a bad habit, in a spectacularly beautiful (albeit cartel-run) version of Bolivia. You can tackle the game however you want: You can go it alone, team up with friends or, if you're feeling bold, even try to take down the boss the second after you start the game. No matter what your play style, Wildlands has something for you.