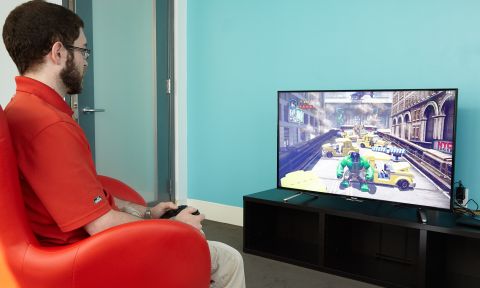 GeForce Now streams lots of games with beautiful graphics and solid frame rates for an affordable monthly fee, but it has room to improve.

Ever since Netflix convinced the general population that owning media was out and streaming media was in, gamers have been wondering when they'd get a subscription-based service to call their own. GeForce Now ($8 per month) is one of the first serious contenders for the title, and while the program is still in its infancy, it speaks of a promising future for the technology. While the service still needs more titles and better streaming quality for certain games, it's definitely worth your attention, and possibly worth your hard-earned scratch.

GeForce Now is a streaming service that renders PC games in the cloud, then streams them to your Nvidia Shield tablet, Shield Portable or Shield TV. The $8 monthly fee lets you stream a rotating selection of about 50 games, although your first three months are free. You can also buy newer titles, like The Witcher 3: Wild Hunt and Metro Last Light Redux, à la carte. Prices range up to $60 on these.

In order to evaluate the GeForce Now service, I tested it for about a week on an Nvidia Shield TV. I had access to all of the subscription games, as well as The Witcher 3, Resident Evil Revelations 2 and Trine 3: The Artifacts of Power. I didn't test every game on the system, but I played through a good selection of them for at least 15 minutes, and some for a few hours, in order to see how well the service ran in general.

First off, the interface is admirably straightforward. Players can see a list of their most recently played games, as well as featured à la carte games on one menu, and featured subscription titles on another one. You can scroll down a little farther to organize games by genre (Action, Racing, Role-Playing and so forth), or even browse curated collections, like all the Batman games or Lego games available on the service.

One of the reasons why Netflix, Hulu Plus and Amazon Prime Instant Video are so beloved in the streaming video scene are because they have fantastic selections. The selection on GeForce Now, by contrast, is either eclectic or haphazard, depending on how much you like what's on offer. Make no mistake: Numerically speaking, launching with almost 70 games is fantastic, but aside from two very notable series, it's not yet a viable replacement for a full library of PC or console games.

GeForce Now excels in offering games in the Batman: Arkham and Lego series. It has the vast majority of both, and they're all available with a subscription. Aside from those two, however, there are lots of incomplete series, including The Witcher, Saints Row, Trine, Devil May Cry, Resident Evil and The Walking Dead. If you want to play games just to kill time, GeForce Now has plenty; if you want to follow the stories or master the gameplay of your favorite series, you're probably still better off with a traditional console or PC, at least until the selection grows.

The most important question is whether GeForce Now can really stream games at full-HD resolution within seconds of buying them, as advertised, rather than waiting for tedious installations or downloads. The answer is a solid "yes," with only one notable exception. Whether a game streams at 30 or 60 frames per second, you'll be able to play it in full 1080p with very little buffering and only a few moments of lag or stuttering.

I tested a wide variety of games, but spent the most time with The Witcher 3, Lego Marvel Super Heroes, Trine 3 and Devil May Cry 4. The latter three titles ran phenomenally well. Each took between 10 and 15 seconds to load, and I observed them running in full-HD resolutions at the frame rates described. Blasting through New York City as a Lego version of Iron Man was as seamless as honing my gun-fu skills against demonic attackers in Devil May Cry's outrageous, fluid spectacle fights.

The Witcher 3, however, proved problematic. Every time I loaded the title up, I found it to be laggy and prone to screen tearing, stuttering, frame-skipping and generally running in such a way as to make it almost unplayable, especially during combat. This was particularly disappointing, as it should be one of the system's showcase titles: easily the newest and most technologically demanding game that GeForce Now currently has to offer.

It's worth noting that I was connected via Ethernet to a 40 Mbps connection and exceeded all recommended parameters for the GeForce Now service, and that The Witcher 3 was the only title that gave me any problems. I also used a router recommended by Nvidia for the GeForce Now Service: a Netgear W7000. However, I am not prepared to say that the problem was on the server side, as Nvidia did not believe that this was a common issue. If you choose to buy The Witcher 3 on GeForce Now, just be aware that it may not run as well as the service's other titles.

GeForce Now works very well (in general), doesn't cost very much and has a reasonable selection for a service that's just starting out. However, if it has a significant drawback, it's that it may not play nicely with your existing setup. To connect as Nvidia recommends, you need fast Internet, an Ethernet connection and a fancy router.

At present, GeForce Now works only on a Shield TV, Shield Portable or Shield Tablet. The first two cost at least $200, while the latter costs at least $300. It's cheaper than buying a traditional console or a gaming PC, but you also don't get access to the same number of games, or new games as soon as they launch.

Nvidia advises users that they need a 10 Mbps connection for bare minimum quality on GeForce Now. For reference, the average American broadband speed is 11.4 Mbps, so there are certainly many broadband connections that are slower than that. Nvidia also recommends different broadband speeds for better tiers of gaming: 20 Mbps for 720p at 60 fps, and 50 Mbps for 1080p at 60 fps.

Assuming you do have a speedy Internet connection, getting good streaming quality over Wi-Fi is highly dependent on your setup and proximity. If you want to run GeForce Now at peak efficiency, you'll need to hook your Shield device directly to a router (or a modem). If your entertainment center isn't within cable distance of your console, streaming games is probably going to be a distant second in terms of overall experience to downloading them.

Finally, Nvidia lists a "Shield-Ready 5-GHz Wi-Fi router" as a requirement, not just a recommendation. These routers are on the expensive end of the spectrum, ranging from $100 all the way up to $300.

(For what it’s worth, I did not have any trouble using a lower-end Netgear WNDR3400 router, but Nvidia recommended that I upgrade, as this might have been the cause of my Witcher 3 issues. As far as I can tell, it was not.)

Consider this test case: A Shield TV costs $200. A Comcast 75 Mbps plan costs $77 per month. (Comcast does not offer a 50 Mbps plan; other service providers may.) GeForce Now costs $8 per month. A D-Link DIR-890L router (Nvidia's recommended model) costs $310. If you are starting totally from scratch, a GeForce Now setup running at recommended parameters will cost $595. It's hardly a deal-breaker, especially compared to what a good gaming PC costs, but even with a Shield TV and a GeForce Now subscription, you may have to upgrade other tech to make them work at peak efficiency.

If you already have a Shield system, you should get a GeForce Now subscription. For the sheer volume of games you get, $8 per month is peanuts, and the vast majority of games run just as well as something you'd download. If you're just looking for something new to play as opposed to a specific game, the selection is good, and will only improve over time.

On the other hand, if you're looking to buy a Shield as your primary gaming system, I'm not yet convinced that it acts as a full replacement for a PlayStation 4, an Xbox One or a PC. There aren't many games available à la carte; there's a significant delay between a game's mainstream release and its GeForce Now release; and running games at full capacity can be both demanding and expensive.

On the whole, GeForce Now has had a very smooth launch and seems like a promising service that already does a lot right, but still has a lot of room to grow. As long as the service continues along its current path, its aim of being the Netflix of gaming definitely seems attainable.