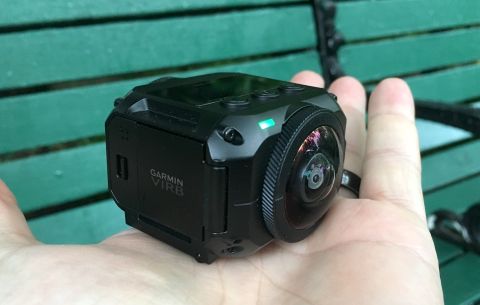 This rugged but expensive 360-degree camera comes loaded with GPS, motion-stabilization, barometer, and more, and has great software to make the most of your videos.

With 360-degree video capture, action cameras have entered a new era. Although the Garmin Virb 360 may be the company's first 360-degree camera, it's clearly part of the second generation of these devices, as its refined interface and design show. I tried out the Virb 360 before its official launch — it will be available in June — and while Garmin has a few minor things to work out, this camera will definitely be one of the best in its class. At $799, however, the Virb 360 is not cheap, so you'll have to think pretty hard before purchasing one. For more affordable options, be sure to check out our best 360 cameras page.

The Virb 360 is a solidly built camera that definitely feels like it can take a beating. On either end of the camera's black rectangular body are lenses which capture the entire world around you. On top, a large, monochrome LCD display offers menus that you navigate using three buttons below the screen. After moving through a brief learning curve, I found it intuitive to scroll through the menus and select the options I wanted.

Looking at the camera from the top, you'll see a slider on the right side; this lets you start and stop recording video with just a flick, even when the camera is off. I liked that the switch has not only a raised area so I could flick it by feel, but also a bright red line — a nice visual indicator.

The left side of the camera has a spring-loaded door, which opens to reveal the microSD card slot, along with micro HDMI and micro USB ports. The bottom of the camera has yet another door that covers a removable 1250-mAh battery.

Also packed into the camera are a bevy of sensors: GPS and GLONASS, a barometer, an accelerometer, a gyroscope, and a compass. You can overlay the data collected by these sensors into the videos you record.

The Virb 360 ships with two clips, one for attaching the camera to a standard tripod screw and another that has a GoPro-style mount. While I was a little wary of their durability, the clips never came off while I was using the camera.

You'll definitely want to use the Virb 360 at the end of some sort of selfie stick. Unlike with Samsung's second-generation Gear 360, there's no handle on the Virb 360, so you'll want something that will let you hold the camera at arm's length, giving you an unencumbered view.

You can pick from among three stabilization modes: One smooths out jitters and vibrations, while another locks in the orientation to keep the horizon level even if the camera tilts or revolves. A follow mode changes the view to follow the GPS' trajectory. You can record using either lens, or both together, and the camera can also shoot in the RAW format.

Similar to the Virb Ultra 30 action camera, the Virb 360 has voice control, which lets you start and stop video recordings, as well as take photos, merely by talking to the camera. It's a handy feature for those times when the camera is mounted somewhere you can't reach it, and when you can't control it using your smartphone. The Virb 360's voice controls were very responsive in my tests.

You can also control the camera using several of Garmin's GPS watches, including the Fenix 3 and 5 series, vivoactive HR and HR+, vivosmart, and Forerunner 935.

I was able to take only a few rides on my bike with the Virb 360, but I was impressed with the video the camera captured on those rides. I attached a 3-foot selfie stick to the front of my bike (similar to what I've done while testing other 360 cameras) and screwed the Virb 360 to the end. I then went for a ride in Liberty State Park.

The clarity and colors captured by the camera's dual 12MP, 1/2.3-inch, backside-illuminated CMOS sensors were impressive. Grass was a lush, deep green, and a red boat stood out vibrantly under the bright sun. I was also pleased by the camera's sharpness; individual leaves were well-defined, and I could easily read small type on signs.

Even though I traveled over some bumpy ground, the Virb 360's image stabilization did an admirable job in smoothing things out.

When I looked at the footage afterward, one odd inconsistency cropped up: Objects on the fringe of the window appeared unnaturally large. For instance, in this still I captured below, the Goldman Sachs building in Jersey City looks much larger, and much closer, than it actually was.

However, once I rotate the image, so that the building is more center-frame, that distortion disappears.

I could see the stitching between the Virb 360's two cameras, but it wasn't as pronounced as with other 360 cameras I've tested. It was most obvious when the lens was aimed directly at the sun; you can see some lens flaring on one half of the photo.

When I was biking into the 10-mph breeze, wind noise picked up considerably.

I used the Virb 360 in conjunction with a beta version of the camera's iOS app. (The Virb 360 will also work with Android devices.) To connect, you must enable Wi-Fi on the camera and then connect to its network from your phone. This method is a little tedious, but it's the way all of these 360-degree cameras work.

After that, I got a live view on my iPhone of the feed from the camera. From here, I could start and stop recordings, take photos, and adjust the camera's settings. I never had any problems connecting, although the video feed would occasionally freeze for an instant.

For more advanced videographers, the app lets you adjust the exposure bias, ISO, color curve, sharpness and white balance. Cleverly, you can set exposure balance for both lenses at once, set exposure for only the rear or the front, or have them both set independently, which is helpful if, say, you're trying to get a photo of a setting sun.

I was also able to test a beta version of Garmin's Virb Edit software (for Macs and PCs), which lets you add transitions, animation and soundtracks to your video, plus a whole lot more.

Provided the camera's sensors were working (and you opted to collect the data), the Virb software will overlay gauges that show your speed, altitude and compass bearing, as well as a small line showing your path during the recording. It's all really neat — like a virtual dashboard — and will definitely appeal to speed freaks (like me) who want to know how fast they were going as they sped down a hill. Within the software, you can change the position of where that data gets displayed, too.

You can also overlay a tremendous amount of data onto your videos, everything from how much air time you get when jumping your bike or water ski to an aviation-style display showing pitch, yaw and more. The effect is almost like watching yourself in a video game.

For anyone who's used iMovie, the Virb Edit app will be very intuitive. It's simply a matter of dragging and dropping transitions, effects and the like.

While expensive, the Garmin Virb 360 is the 360 camera to beat. It delivers excellent video, has an easy-to-use app as well as on-camera controls, and it lets you overlay all sorts of data on top of your videos. At $799, the Virb 360 costs a lot more than other cameras. If you're looking for a 360 camera for more casual situations, the $299 Insta360 One is a more cost-effective option. But for outdoors-types who want a camera with all the trimmings, the Virb 360 is absolutely packed.