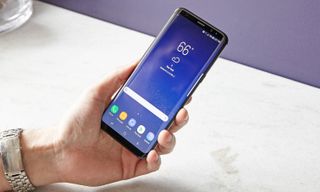 We've been impressed with the Galaxy S8's Infinity Display, Snapdragon 835 processor and excellent rear camera. In fact, some of us have even upgraded to the Galaxy S8 as our personal phones. But we wanted to see how other smartphone users were getting on with the device now that they've had some time to put the S8 to the test.

It turns out owners have plenty to say — both good and bad. Here's a quick summary of user reviews on Amazon, Best Buy and Samsung.com.

Many reviewers at Best Buy said the S8 is the best on the market due to its wireless charging capabilities, 8-core processor and HDR support. Owners also praised the S8 for running on Android 7.0 Nougat and for having expandable storage options via microSD. One reviewer who previously owned a Google Pixel XL praised the S8 for having a larger screen than Google's phone while coming in a more compact design.

Many Galaxy S8 owners posting to the Samsung website were impressed with the company's latest phone. One reviewer who upgraded from the Galaxy S5 to S8 described the new smartphone as "snappy." Other owners said they appreciated the S8's Samsung Pay mobile wallet, which allows for faster checkouts.

On Amazon, many reviewers expressed frustration with the awkward placement of the rear fingerprint scanner and Bixby button, though one critic said "muscle memory" will help users get over this change. Additionally, many reviewers agreed that Samsung is not the best pick for getting timely Android software updates.

Best Buy reviewers also expressed dislike for the hard-to-reach fingerprint sensor and limited storage (internal and cloud), while other users weren't fond of the the S8's high price tag. Also, a consensus among Best Buy reviewers was that the Bixby button is inconveniently placed. "That button is always in the way of volume control and constantly getting pressed," one reviewer wrote.

Although most reviewers at Samsung liked the S8, there were a few complaints, such as those about the bottom, built-in speaker and easily scratched screen. Some users weren't as impressed with the phone's battery life as others were. Some owners didn't care for the S8's curved edges (which make it difficult to find cases and screen protectors that fit) or the location of the fingerprint sensor. Bixby's limited functionality also drew criticism.

Modern and streamlined, the Galaxy S8 is shaping up to be one of Samsung's best-regarded phones yet. While users have complained about the location of the S8's fingerprint sensor, they have also acknowledged that there are other ways to secure the phone. Software updates also take longer to reach S8 owners, though at least the S8 is shipping with the current version of Android. The S8's use of Bluetooth 5.0 earned near-universal praise from users. Even with the criticisms about the Galaxy S8, people who've bought the phone have found plenty of reasons to be satisfied with their purchase.