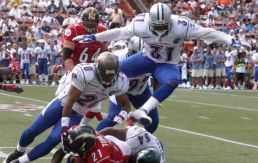 Are You Ready for Some (Fantasy) Football?

We’re talking fantasy football, and it’s hotter than ever. More than 27 million American play fantasy sports, according to The Fantasy Sports Trade Association. There are fantasy versions of just about every sport, but football is by far the king. Of the 27 million American fantasy players in 2007-2008, 82% played football. (Baseball came in at a distant second, with 46% of total fantasy players.)

Lots of fantasy football sites and services compete for the attention – and, in some cases, money – of these virtual players. Let’s take a look at a few of the biggest “players” in the fantasy football field.

(Note: if you’re new to fantasy football, several of these services – including ESPN and NFL – offer Fantasy Football 101, a basic primer that can help you get up to speed quickly.)

Next Page ESPN Fantasy Football
2 Comments Comment from the forums