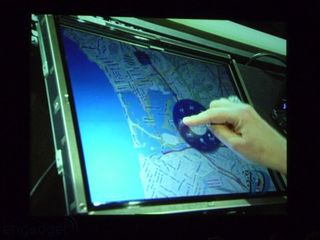 Analyst Opinion - It is clear that Microsoft and Apple take direction from each other. Both firms were known as the original "Pirates of Silicon Valley" after all. At the Wall Street Journal’s "D: All Things Digital Conference" Microsoft showcased what will be the cornerstone of Windows 7 - a Multi-Touch PC interface. This suggests not only a change in how we will interact with Windows but with Mac OS as well, since Apple is unlikely to give up their perceived leadership in user interface design.

I have been using an HP SmartTouch PC for some time. Given Apple’s aggressive stance with the iPhone and iPod Touch, I am somewhat surprised that they have not come out with a touch-screen Mac product yet. The reason may be that getting a large screen to do multi-touch hasn’t been that easy until recently and there is nothing currently selling in the PC space that is affordable with this capability.

I saw this video some time ago, which imagines a multi-touch Mac (and every time I see it I want one). Recently a new video popped up showcasing what appears to be an Apple spin on the Microsoft Surface concept but targeted at your desktop.

HP has been working on such a concept for awhile as well and what we have seen so far clearly looks like a lot of fun. Of course, the bigger the screen, the more interesting all of this gets and it adds the angle that working on a big screen as a team could be both fun and productive .

I’ve linked to a number of interesting videos above primarily because you really can’t get a sense for multi-touch on a big screen until you have seen it in action.

It used to be the case that folks really didn’t want to buy an All-in-one PC (interestingly, more and more companies, including Intel, are referring to consumer desktop PCs as all-in-one PCs anyway), because it made no sense to them to use a monitor that might last for seven years and cost a fortune to a PC that would probably last for three or four years and might actually cost less. Since then, monitors have come down in price, currently you can buy a nice 22" monitor for under $300 and a 24" - which compares to my first 19" which cost a whopping $3000. So getting the two things in a single package does not represent the kind of pain it once did.

In addition, in order to do multi-touch, you are going to have to replace the monitor anyway and getting one that was designed to go with the PC you bought, and I know this from experience, will save you a lot of aggravation in terms of setup and screen accuracy. In addition, it is hard to imagine many folks will need a screen much larger than 22" or 24", which I expect will be common in all-in-one products when Windows 7 comes to market.

This suggests that, sometime around 2010, the hot desktop PC may actually be an All-in-one computer with a multi-touch screen. Laptops, which already come with a build in screen, will be much easier to convert but I’ll bet multi-touch will available only in the more expensive ones.

But, I wonder, in that time frame will we shift back to having a desktop PC and then start using a smart phone instead of a laptop? I’ve just recently become aware of the new Celio Redfly cell phone accessory and will be starting a lengthy test to see if I can live with a cell phone instead of a laptop. I’ll write about that later. (The Redfly is basically is laptop sized screen and keyboard for cell phones.)

Wouldn’t it be funny if it turned out Apple was right all along and the market finally moved to Macintosh like products? Now the question is who will get this puppy to market first - Microsoft or Apple? I figure that whoever makes the fourth quarter 2009 with a touchscreen desktop will. Stay tuned.