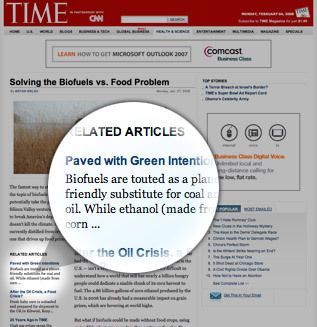 Sphere was set up in 2005 and formally launched in 2006 with venture capital of $4.25 million as a traditional blog-search engine that found itself competing with the established likes of Tehnorati and Google Blog Search. So through 2006 and 2007 the company refocused, changing instead into a “related content” engine that searches for related blog content to a web page based on a semantic search of the content. Using the built-in Sphere-It widget on a page, the engine throws up blog articles relevant to whatever you’re reading.

Sphere has established partnerships with big names, such as Time.com, Reuters, The Wall Street Journal, The Washington Post, Newsweek and CNN.com to name a few; and the company boasts that its Sphere-It widget is present on just under 70,000 websites today.

The acquisition will not see Sphere subsumed into the depths of AOL, according to the company’s EVP who will inherit the acquisition Bill Wilson. Instead, Sphere’s brand and approach will be kept as-is as AOL attempts to develop a series of niche brands; around what he calls “Passion Points” of small but passionate audiences, he said in an interview with TechCrunch.

AOL has been opening its chequebook to acquisitions big and small, from the 16-employee Truveo video search engine to the massive social networking site Bebo, in a deal for $850 million in March of this year. Quite how the company has been leveraging all of its new talent is another question, with top executives, founders and grey matter leaving AOL shortly after deals have been finalised, though ultimately the acquisitions have all been serving one purpose – to put AOL content in front of more web surfers.

Through Bebo, Truveo, and now Sphere, to name a few, AOL content such as ads can be directly plugged into thousand scores of social networking profiles, and videos. The customized and targeted content would display across many of the biggest online content brands as well as some of the niche nooks.

All of this is being played out against the backdrop of Microsoft’s attempts to acquire Yahoo, and Yahoo’s efforts solicit more money. Many Wall Street analysts feel that Yahoo is desperately looking for something to shore up its position against Ballmer and co. A merger with AOL could help to expand the media side of its business significantly.

Yahoo is beginning to admit that the technology side of its business, mainly contextual advertising, is flawed and not up to the task of saving the company from Microsoft. The company is beginning a trial, showing Google ads alongside their own, in an attempt to boost revenue. Microsoft said this week that a partnership between Google and Yahoo would be monopolistic.

If Google and Yahoo merged their online advertising efforts, they would control 90-percent of the contextual advertising market, and this is a position no regulator would allow to go unnoticed. Yahoo appears to be considering a move away from its technology business and refocus entirely on online media; and in this sphere adding AOL to its mix would make a lot of sense.

The alternative for Yahoo is to merge with Microsoft and do battle with Google. Jerry Yang, Yahoo CEO and Founder, said that Yahoo would reconsider a Microsoft offer if the bid was increased from $42-billion. A potential acquisition of AOL, said Yahoo, would help increase Yahoo’s attractiveness as an acquisition target to give the company a real media boost.

Either way, AOL is benefiting from the speculation and can continue to acquire online media companies like Sphere and extend its roots deeper into the nooks and crannies of the web.