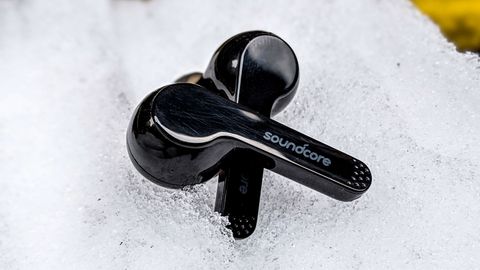 The Anker Soundcore Liberty Air offers good comfort and sound at a budget price, but the connectivity and controls could be better.

Anker has done an impressive job of making the leap from portable-charging devices to wireless earbuds. Its SoundCore line remains a top seller in several audio categories, with last year’s Zolo Liberty Plus becoming a solid addition to the true wireless earbuds market. Now, the company has pushed forward to create a more legitimate Apple AirPods alternative – one designed to offer the same convenience as Apple’s earbuds and more features, at half the price.

That product is the Anker Soundcore Liberty Air. But although it outperforms the AirPods in key areas such as audio and comfort, it fails to match Apple’s portable-charging capabilities and speedy connectivity. Still it’s a very good option for budget-conscious music lovers.

I understand that Anker wants to achieve the same minimalist look as the AirPods. However, this is too on the nose of what Apple originally introduced, from the shape to the high-gloss finish, which attracts fingerprints and scratches easily.

That same banality carries over into the product’s build quality. Each earbud is covered in a soft-plastic shell that is slightly sturdier than the casing on the AirPods, but not enough to protect them from severe damage. Both models will break if you step on them. The only redeeming quality is the IPX5-rated coating that makes the earbuds sweat and water resistant.

The charging case is solid and has magnets on the inside to keep the buds locked in and protected; the look is similar to the AirPods' case, only longer and thicker. The lid opens easily to access or store the buds. Three LED lights on the front indicate the number of charging cycles; the bottom houses a micro-USB port.

The Liberty Air is available in black or white, aping the AirPods on color variety. Anker is also more generous with accessories, bundling four sets of tips in different sizes and a micro-USB cable. Apple only provides a Lightning cable.

Anker is known for creating light, comfortable earbuds. The Liberty Air follows this tradition — you can wear these for several hours on end and not worry about fatigue. The earbuds provide great stability and rest gently on the concha. The ear tips feel soft and fit securely as well.

No individual weight has been listed for the Liberty Air, but Anker lists the product at 2.1 ounces, which places it in a higher weight class than the AirPods (1.3 ounces). Apple’s charging case is more travel friendly, thanks to a slimmer profile and smaller design, but carrying the Liberty Air around as a complete package won’t weigh down your pockets or gym bag.

The Liberty Air features touch controls and has more programmed gestures than the AirPods do; however, it’s just not as responsive as Apple’s buds.

The controls take some getting used to, but getting them to work is even more of a task. Some truly wireless earbuds are super-sensitive to touch and often mistake the controls, but these buds just fail to register gestures — I had to perform them several times for the buds to recognize any activity.

Taking the Soundcore Liberty Air out of the charging case instantly places them in Pairing Mode, but the device struggled to communicate with compatible devices. When it worked, the process was standard: Enter your device’s Bluetooth settings, find “SoundCore Liberty Air” on the available list, and select it.

The Liberty Air won’t wow you with detailed sound like the Master & Dynamic MW07. What it does is reproduce music and low-frequency sounds clearer than the AirPods.

As I listened to Q-Tip’s “Vivrant Thing,” the bass levels were more accentuated than on the AirPods, which provided a stronger kick and reverberation. My head was nodding in sync with the record’s infectious bassline. Percussion sounded sharp and impactful, never once compromising the rapper’s airy vocals. Even when raising the volume to its highest level, the soundscape was balanced and distortion-free.

When switching to Prince’s 'Raspberry Beret," the buds showcased their mid-range exceptionally well. The Love Symbol himself commanded the soundstage over the densely layered beat, even giving the background singers some shine. But much like the AirPods, highs aren’t the Liberty Air’s specialty, so certain instruments, like the finger cymbals and violin, went unheard, not uncommon with many instrumental-heavy records.

I tested the buds with video content as well, and was met with mixed results. There was some latency when watching YouTube clips. To gain a better sense of depth, I pulled up the trailer for Jordan Peele’s "Us," and noticed recessed vocals. On the plus side, the buds gave the symphony-esque score of the Luniz’s “I Got 5 on It” some oomph and increased the fright factor.

Anker’s sound profile could benefit from some tweaking, which is a feature available on some wireless earbuds via companion app. Neither Anker nor Apple offer an app for their respective devices.

After securing a tight seal, the Liberty Air did a nice job of blocking out ambient noise. I was listening to music in my living room, with the TV at a high volume, and wasn’t interrupted by the intense debates on ESPN’s "First Take." Muting my cat’s attention-seeking cries was a blessing; the buds are also effective at silencing street sounds, such as rowdy pedestrians and truck engines; just don’t expect them to tune out horns or sirens.

It’s a swing and a miss for Anker when it comes to digital assistants. The Liberty Air supports both Siri and Google Assistant, but between the buds’ poor touch response and speech recognition, they go to waste here. Enabling the feature is frustrating, especially when listening to music at the same time. The buds couldn’t distinguish whether I wanted to pause music or pull up Google Assistant.

I had to perform the double-tap gesture a few times to activate the AI software; when I did, my voice commands were poorly translated. Using the feature outside was even more disastrous since the loud traffic noises drowned out my voice.

Anker bills the Liberty Air at 5 hours on a full charge; realistically, it’s about 4 to 4.5 hours depending on usage, as phone calls and volume levels affect overall battery life. The battery life is about the same as the AirPods 4.5 hours, and longer than most models in its price class. I used the buds for 1.5 hours daily, which was enough for  three days of listening before recharging. There’s also a standby mode programmed to automatically turn off the buds when not in use.

The charging case holds three charging cycles, providing 15 hours of additional playtime. It’s a good amount to work with, although it doesn’t match the AirPods case (24 hours). But make sure that the case has a decent amount of power; it won’t charge the buds at the same time it’s charging. After fully charging the case, the buds were at the same battery level (40 percent) as they were when I first took them out of the box.

As a calling headset, the Liberty Air is serviceable. Calls sounded low, but people could hear me clearly and I could make out what they were saying. I recommend using the buds indoors because the mics are sensitive to background noise, so you won’t be able to hear much in noisy settings. Most buds in the category only take calls in mono, but the Liberty Air lets you hear calls on both the left and right channels, like the AirPods do.

Most Anker audio products support Bluetooth 5.0, including the Liberty Air; unfortunately, the buds suffer from connectivity issues. It takes longer to reconnect to a device (estimated 1 minute) and dropout happens often on the left bud. The W1 chip in the AirPods makes pairing and switching between devices a breeze, and bud-to-bud connection is perfect.

When it did hold a connection, I was able to stream music within a 40-foot range. Another perk of having Bluetooth 5.0 is the option to connect to multiple devices simultaneously. The feature runs well, and I enjoyed the freedom of managing playback from my MacBook control panel while streaming Spotify on my smartphone.

For $79, you should not overlook the Anker SoundCore Liberty Air as a potential AirPods alternative. These earbuds provide more comfort, better noise isolation and even better sound than its competitor, at half the price. But that doesn’t make the Liberty Air superior to the AirPods.

In fact, there are other truly wireless models that cost more and less than $100 that rise above the Liberty Air – the JLab JBuds Air ($49) and Jabra Elite 65t ($151) are two that come to mind. Nonetheless, if you’re an Anker fan who wants something more versatile than the AirPods and at a lower cost, you could do a lot worse than these buds.