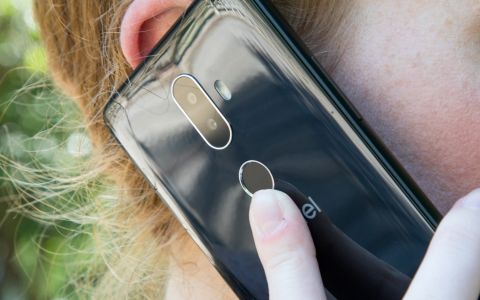 This cheap phone doesn't offer much value, because its performance and battery life are dismal.

Affordable Android phones have embraced flagship features, such as dual-lens front-facing and rear cameras, edge-to-edge displays with 18:9 aspect ratios and biometric sensors. But even a cheap phone that doesn't look outdated can't necessarily keep pace with even midrange models.

The $150 Alcatel 3V is proof that sometimes you need to shell out a little more cash to get a phone worth the money you're spending, because even $150 is too much to throw away on a phone this bad.

Besides its low price tag, Alcatel's 3V has a few good points, though they come with their share of caveats.

Design: Among budget phones, Alcatel's 3V is one of the better-looking models around — at least when you see it from the back. A glossy, black plastic coats the rear of the device, disrupted only by the silver trim that surrounds the vertically stacked dual-lens camera and fingerprint sensor.

At first glance, the 3V could almost be mistaken for a pricier flagship phone — in fact, a few of my friends commented on its design when I took the 3V out to do some camera tests on a Brooklyn rooftop. Beneath the sensor on the back is a small, light-gray Alcatel logo. The effect is, dare I say, elegant, at least until the fingerprints start piling up on the high-shine coating.

Display: Like other budget phones with large LCD panels, the 3V is a sufficiently bright phone that doesn't achieve the color accuracy or richness of more-expensive Android flagships that have OLED displays. Streaming a preview for The Meg, I was struck by how the darker deep-ocean scenes looked indistinct and almost muddy compared to the rich blacks you get with an OLED display.

Alcatel's budget handset reached a peak brightness of 443 nits on our light meter, just shy of the 466-nit smartphone average, though not too shabby. This phone's screen was easily viewable in bright sunlight, and film trailers with plenty of daylight action looked great on the 3V's sizeable 6-inch display.

Like other budget phones, including Blu’s R2 Plus and the Moto G6, the 3V had a respectable showing on the sRGB color gamut (116.3 percent for the 3V) and Delta-E test (0.46). Numbers closer to 0 are more accurate. This phone doesn't have the most dazzling display, but everything looks good enough.

Software: Alcatel's Android skin is inoffensive, if outdated. The 3V runs Android Oreo 8.0 and offers both a split-screen app view and face unlocking features. But everything runs so slowly that using split screen is an exercise in frustration. (More on performance in a bit.)

Of course, there's no guarantee that Alcatel will update the 3V to Android P this year, or ever. Given the company's track record and this phone's budget status, we're betting that the 3V will get left behind when the latest version of Android officially rolls out later this year.

Performance: Alcatel pairs a MediaTek 8735A processor with 2GB of RAM, which tells you all you need to know about how this phone performs. The 3V reached 1,834 on the Geekbench 4 test of overall system performance, which is, frankly, awful — even for a sub-$200 handset. Blu's $129 R2 Plus also features a MediaTek CPU but adds an extra 1GB of RAM. That phone trounced the 3V, with only a mediocre score of 2,319. Last year's $229 Moto G5 Plus hit 3,746, and the Moto G6 hit 3,934, proving that it's tough to beat the performance of Motorola's budget lineup.

The 3V handled graphics slightly better than system tasks, scoring 6,642 on 3DMark's Ice Storm Unlimited benchmark (a graphics performance test we use for phones in this class). The R2 Plus fell short, with a score of 5,724, while the Moto G5 Plus (13,862) and G6 (12,616) blew their budget rivals away.

The 3V's performance is so terrible that I installed PUBG Mobile to see how the device handled the game's graphics, and I couldn't even get the game to open. I was stuck on a loading screen for several minutes, then just gave up.

Cameras: Good news: Even this sub-$200 smartphone boasts dual rear cameras. Unfortunately, you get what you pay for in photo quality.

The 3V's 12-megapixel and 2-MP rear-facing lenses enable a bokeh effect, which blurs the background of an image and brings the subject into focus. In theory, this would make your 3V photos look like what you get from an iPhone. In reality, the 3V's bokeh mode makes your images look like something you tried and failed to do yourself with the blur tool in Photoshop.

I used the 3V to shoot the perfect Instagram: a glass of rosé in front of the downtown Brooklyn skyline on a rooftop at sunset. It should've been gold. Instead, part of the glass's rim and the edges of my hand were unevenly blurred into the background, too. I couldn't share the picture to my social networks — what a waste.

Without the bokeh effect enabled, the 3V's rear cameras fare well in natural light. In an image I captured of the Bryant Park fountain ringed by contemporary ballet dancers with Midtown Manhattan's skyscrapers in the background, the photo's lighting wasn't true-to-life, but it did create a dramatic shot.

The 5-MP, front-facing lens takes average selfies, with a beauty mode to smooth out any bumps or blemishes. I dislike these beauty modes, because they make my skin look like an alien's, but some people love them.

Battery life: Despite its sizable, 3,000-mAh battery, the 3V lasted just 7 hours and 16 minutes on the Tom's Guide Battery Test, which involves continuous web surfing over T-Mobile's 4G LTE network. The smartphone average is 9:48, and that 2-hour-plus gap is absurdly abysmal.

Not only does the 3V die more rapidly than other phones — even budget rivals such as Blu's $129 R2 Plus, which lasted a paltry 7:56 — it also takes forever to juice back up when plugged in to Alcatel's charging brick. After an hour of charging, the 3V's battery was still at just 30 percent.

Overall feel: While we liked some elements of the 3V's design, looks can be deceiving. Whenever I picked up the phone, I was struck by how cheap it felt. The plastic is incredibly lightweight, but not in a good way. The 3V's face is generic, with no distinctive markings or logos to brand the device. The 6-inch display doesn't extend all the way to the edges, so there's no reason for the bezels to be as thick as they are.

The Alcatel 3V is available unlocked on Amazon for $150 with 16GB of storage and 2GB of RAM. It comes in one color, Spectrum Black. The device works on GSM networks and is compatible with AT&T and T-Mobile in the U.S. You can't use it on CDMA networks like Sprint's and Verizon's.

Budget phones are improving by leaps and bounds every year, but you still need to be wary of phones with especially low prices. Like too many other sub-$150 phones, the Alcatel 3V suffers from terrible performance and paltry battery life. Though they may have some flagship features, such as dual-lens cameras and face-unlocking, these cheap phones don't offer a premium experience.