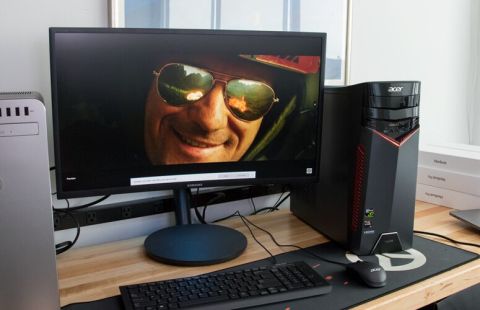 The Acer Aspire GX-281 is a Ryzen-powered desktop computer that looks cool but is expensive for the performance it offers.

It's no surprise that Acer is going for cheaper, midrange components for its budget gaming PC. The $799.99 Aspire GX-281 is among the first desktops to use a Ryzen 5 1400 CPU paired with an Nvidia GeForce GTX 1050 GPU. The result is a tower that can play games on medium settings and gives you the chance to upgrade — if you're willing to put in some elbow grease. But with other PCs offering higher-end performance for the same price, upgradability is the biggest thing the Aspire has going for it.

I really dig the Aspire GX's "evil Power Ranger" aesthetic. The front features matte black plastic outlined by crimson grilles and a glowing red light in the shape of a V. The very bottom has an Aspire badge in faux brushed aluminum, and near the top of the face, there's some shiny black plastic with a silver Acer logo. There aren't any fancy lighting effects, or a window to see your components, but that's not surprising in an $800 desktop.

The Aspire's port selection is standard for a midsize gaming tower. The front houses a USB Type-C port and a full-size USB 3.1 port for easy access, as well as headphone and microphone jacks and an SD card reader.

There are six USB ports on the back (four USB 2.0 ports and two USB 3.1 ports), an Ethernet jack, DVI, DisplayPort and HDMI outputs, and mic in, line in and speaker jacks.

The Type-C port, oddly enough, appears to be an adapter squeezed into the space for a full-size USB port. I appreciate having the newer port, but it does look strange.

We see so many computers that can be opened without tools, so I was disappointed to have to dig out a screwdriver to see the Aspire GX's guts. After I removed two screws on the back of the machine, I just needed to give it a quick tug for the left side panel to come off. That revealed the motherboard, CPU fan, rear case fan, RAM, Zotac GPU and power supply. (If you want to swap out the GPU, you'll need to bust out another, smaller screwdriver.) Because the hard-drive section is covered by a metal wall with screw-based brackets, it can be difficult to replace it (especially because the cable management is very messy in that area).

The combination of a Ryzen 5 1400 CPU and an Nvidia GeForce GTX 1050 GPU with 2GB of VRAM is fine for midlevel gaming, but don't expect the highest resolutions and effects.

When I played Rise of the Tomb Raider on the High settings preset at 1080p with SMAA anti-aliasing, I had Lara Croft climb a mountain in a blizzard at between 37 and 51 frames per second. I could make out each individual snowflake, and there wasn't any stuttering or tearing. Turning the preset up to Very High made the game unplayable; it would freeze for several seconds between actions.

We saw similar results in Grand Theft Auto V. It ran at 28 fps at 1080p and Very High settings, while the average is 76 fps. The MSI Trident hit 30 fps, and the Asus VivoPC X ran at a smoother 45 fps. We consider 30 fps and higher to be playable.

For times when you want to log out of Steam to do some work, the Aspire's 3.2-GHz AMD Ryzen 5 1400 CPU, 8GB of RAM and 1TB HDD make it a decent workhorse. I had 30 tabs open in Google Chrome, including one streaming a 1080p episode of "The Daily Show with Trevor Noah," and didn't notice any lag.

The Aspire comes with both a stock keyboard and a mouse in the box. I found them to be fine for simple productivity tasks (I wrote much of this review with them).  But the keyboard keys are mushy, and the mouse doesn't have much weight to it. I typed at 108 words per minute on the 10fastfingers.com typing test, which is just over my usual 107 wpm. However, I had a 4 percent error rate, which is double my usual 2 percent error rate.

Acer offers a wide variety of more powerful configurations for the Aspire GX, going up to an AMD Ryzen 7 1700X CPU, an Nvidia GeForce GTX 1070 GPU with 8GB of VRAM, 16GB of RAM and a max storage option consisting of a 2TB HDD and a 256GB SSD. The most expensive version is $1499.99.

The Acer Aspire GX-281 is designed to be a gateway to desktop gaming for budget-conscious shoppers. With an $800 starting price, it fits the bill and can play most games on medium settings.

But if you're married to the midtower design, you can get a machine with even better specs for a similar price. Both the MSI Trident ($899) and the Asus VivoPC X ($799) use a GTX 1060 GPU while staying in the same price range, giving you the benefit of better performance and VR-readiness.

But those machines don't allow for any upgradability. If you want to be able to take the side off the computer and tinker, the Aspire GX-281 is the way to go.