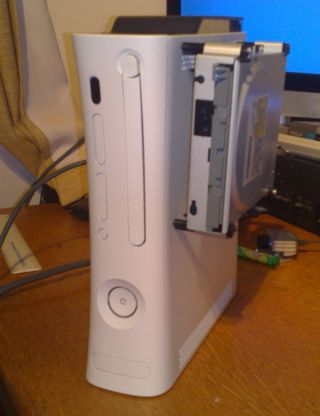 One Xbox 360 gamer decided he wasn't going to be beaten by the dreaded Red Ring of Death (RRoD). Rather than purchasing a new console, he enlisted a fellow friend and modder "rbz" to take a peek at te problem. According to rbz here in this BenHeck post, he applied "the usual thermal compound fix etc.," and it seemed to work... for roughly two hours.

Annoyed, rbz cracked open the console to take a closer look at the issue. "Firstly I noticed that the bottom of the DVD drive was 'stained' black with heat. If I rubbed the colouring, it wouldn't move," the post reads. "This obviously was a major problem. If the heat had damaged the metal on the metal DVD drive case, it was clearly getting really hot to burn that."

rbz assumed that Microsoft "sacrificed the GPU's heatsink" in order to cram the optical drive into the console's design. But screwing a fan onto the heatsink also meant that the optical drive had to come out and be mounted externally onto the casing. While this isn't exactly attractive, it definitely did the trick.

The process took eight steps: screw the fan onto the GPU heatsink, replace the tiny SATA cable with a longer one, modify the fan plastic so that it fits together again, and then cut few holes in the top of the Xbox-- one to further help ventilation, and another for the optical drive cables. The other steps included testing, closing the console, and mounting the drive.

"It worked fine, even the eject button," the post reads. "It hasnt given him any problems since. This will fix your xbox RRoD (for good, I think) but however you'll have to make your drive external."