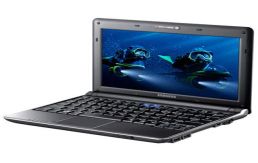 We’re jumping for joy. Matte-surfaced LCD panels are finally making a comeback! And with HP Compaq getting on the bandwagon, there’s no reason why their competitors won’t too. Reflections in the screen surface are non-existent, which we greatly appreciate, and the maximum brightness is 293 nits, which is good enough for outdoor use. We should mention, though, that the way the brightness adjustment works is pretty odd – you go directly from 293 nits to 140 nits. There’s no intermediate adjustment.

The display’s definition is fairly low, at only 1024 x 576 pixels. Most software needs a minimum height of 600 pixels, and we ran into problems on several occasions.

The panel uses TN technology and has an average response time of 5 ms, with narrow vertical viewing angles. The response time is sufficient for office applications and playing movies.

The default colors were totally off, with a Delta E (average difference compared to true colors) of 11.3! Not a single color was close to being true and all colors were cold. We also noted a strong colorimetric shift towards blue.

According to Compaq, "The Mini 110 optimizes Web access and basic communication, plus, at just 2.33 lb., it's light enough to carry everywhere." This netbook is also one of the few to come with a matte screen and plastics, so outdoor use won’t be a headache and fingerprints aren’t as prevalent.

The all-black Compaq Mini 110 holds up to comparison with the best netbooks in the finish department. The plastics are of high quality, as are the components. The chassis’ surfaces are all matte-finished, which avoids fingerprints and dust. It’s a shame that glossy plastics have been used for the cover and screen bezel, since dust accumulates quickly there, and especially near the hinge.

As on many 10-inch netbooks, the keyboard takes up all the available width. The keys are wide and flat, and it’s easy to see that all the space has been used. The feel is rather firm, unlike on HP products. But it still makes for comfortable typing.

The touchpad is much wider than it is high. We found its matte surface a pleasure to use. Scrolling is fast and precise. We’d have liked for Compaq to use a slightly higher touchpad, however, since there’s a little space left over under the space bar.

On HP and Compaq models, the click buttons are located on either side of the touchpad, instead of under it where they usually are. It’s an original touch, but not very practical, and might have been justified if the vertical dimension were larger. The Dell Mini 10’s touchpad is the same height, and its buttons are located under the touchpad.

As on other models from this maker, there’s a button for disabling the touchpad to avoid stray input when you’re typing and/or using a USB mouse.

The Webcam is okay, though the images it produces lack contrast and detail. It’s quite usable if the lighting is fairly bright. This model is not at home in low-light conditions.

The netbook is not really quiet because of a fan that’s always on, and it becomes fairly noisy when it’s under heavy load.

The various connection ports are arranged along the edges of the computer: two USB 2.0 ports, one RJ45 (hidden by a rubber flap), headphone jack, 2-in-1 memory-card reader, and a proprietary extension port. That’s limited connectivity, even for a netbook.

The on/off switch is on the front edge, along with a switch that controls Wi-Fi.

Under the computer are the battery and a panel covering a single RAM slot. This is already occupied by a Samsung memory module.

The glossy cover of the Compaq Mini 110 and its 6-cell battery2 USB 2.0 ports, memory-card reader, VGA and RJ45

The Intel Atom N270 processor is a classic choice for netbooks. This machine has quite decent processor performance compared to others in its category. It scored an index of 20. An index of 100 corresponds to the DV reference computer, the Fujitsu-Siemens Amilo Xi3650.

The GMA 950 chipset used along with the processor in the N series (N270 and N280) won’t decode HD video. That’s not dramatic in this case, since it would be impossible to screen video directly in HD quality on this model anyway because of the 576-line height of its display (equivalent to DVD quality). You could connect it to a bigger display using its VGA port, but keep in mind that not all TV sets have that kind of connector.

Gaming on netbooks is just starting to catch on, especially on machines with the Nvidia ION chipset. But since this netbook doesn’t have one, you’ll have to settle for older 3D games (Quake III, Warcraft III, etc.) or 2D titles.

The speakers are under the display. The quality is poor, with a dry, aggressive sound, no lows, and a tendency to saturate the highs. The headphone output is better, despite a constant hiss.

Unfortunately the tradeoff is a large, ugly protuberance under the netbook, since the battery sticks out from the shell. That lost it one star in this section of the review. But the Mini 110 won back some points for its low weight - 2.6 pounds - which is lighter than the Dell Mini 10(3 pounds).

We have mixed feelings about this one. The quality of the LCD panel isn’t great, but we like its matte finish. The battery life is good and the machine is light, but the battery is poorly integrated. Still, this is a pleasant netbook to use and a good possible choice overall if you can overlook its faults.