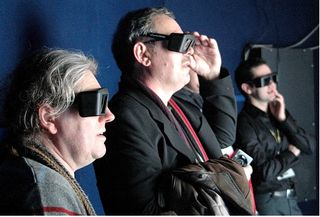 Though it has been around for a long time, 3D has only seen a surge in popularity in the last couple of years. Thanks to movies like James Cameron's Avatar, movie studios know that 3D is a profitable format and something that can be used as an integral part of a movie's story. That said, there are some film makers that just plain don't like 3D. Up until now, we had thought Martin Scorsese was one of them. After all, a couple of years ago, he was quoted as saying he had no interest in making a 3D movie. Then again, it seems Scorsese has had a change of heart. In fact, after making Hugo in 3D, he's now such a big fan of the format that he recently stated he would consider it for all of his movies.

When asked in a recent interview by Deadline if he would prefer to shoot all of his movies going forward in 3D, Scorsese said he 'honestly would' as he feels there isn't a subject matter that can't absorb 3D and the additional layer of depth as a story telling technique. He compared it to Technicolor, which was, for a period of 10-15 years, only used for musicals, comedies and westerns.

"It wasn’t intended for the serious genres, but now everything is in color," he said, adding that once 3D technology progresses, they could cut out the glasses required to enjoy content. When asked which of his older movies would have benefited the most from being in 3D, Scorsese responded with either the Aviator or Taxi Driver, the latter because of "the intimidation of the main character" and his "frightening kind of presence."

Check his full response to the question regarding his future 3D plans below:

It's clear that 3D has grown on Martin Scorsese. In the interview he praised James Cameron's Avatar because it made 3D 'welcoming' and because it changed the climate for 3D as a format. Scorsese said that after Avatar, 3D was taken more seriously as a narrative element and tool. Has there been any specific movie that changed your opinion of 3D? Let us know in the comments below!

Hit up Deadline for the full interview.