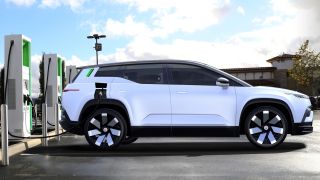 Electric automaker Fisker may have been missing in action for a few years, but its returned from its long absence with a new SUV that — if all goes according to plan —will cost less than a Tesla Model 3.

It's called the Ocean, and while we've known it's been coming for some time, today Fisker unveiled the crossover's final design and ambitious price at a private event in Los Angeles. The car will be on display at CES 2020 when the show opens on Tues., Jan. 7.

The Fisker Ocean will start at $37,499 when it goes on sale at the end of 2021. Factor in the $7,500 federal tax credit for electric vehicles, and that's how Fisker is able to offer the Ocean for under $30,000. Those interested can reserve theirs now using Fisker's mobile app, though anyone who places an order now won't receive a vehicle until 2022.

Fisker is also offering a flexible lease with the Ocean, whereupon customers will pay $379 per month after placing $2,999 down. The lease can run as little as one month, eight months, 22 months or "several years," with 30,000 miles included per year.

If that all sounds too good to be true, well, we've been here before with Fisker. The automaker actually went bankrupt back in 2013, and sold its assets — including the design for its iconic Karma electric sports car — to a Chinese auto parts supplier, which is now producing new examples under the Karma Automotive brand name. The reborn entity building the Ocean represents the true successor to the marque.

Fisker claims the Ocean is the "world's most sustainable vehicle," owing to its solar roof, which it estimates stores enough power to give drivers an extra 1,000 miles per year. That breaks down to about 83 miles a month, which isn't as impressive a number, though every mile or two helps.

The carpet is made from nylon sourced from fishing net waste, the upholstery is derived from polyester and recycled plastic, and other surfaces are fabricated from polycarbonate and polyurethane. Fisker says the Ocean's interior is fully vegan, though the company only provided images of the exterior in this unveiling.

The materials involved might shed light on how Fisker intends to sell the Ocean and still make money. What's more, when you need your vehicle serviced, you'll have to go through Fisker themselves, requesting it through the app. Personnel from the manufacturer will also pick up and return your car.

All Ocean models will come with what Fisker calls an "extended range" battery, offering 250 to 300 miles of travel on a charge. For what it's worth, the standard range Tesla Model 3 can still go 250 miles, and the Tesla Model Y compact crossover offers 300 miles standard, if you opt for the cheapest rear-wheel drive model (the dual-motor versions cut about 20 miles).

Fisker's return to market definitely has the techy look, specs and features becoming of a startup electric automaker entering the new decade. But the real test — as it often is in this business — will be whether or not the company can make the Ocean a reality for customers in 2021 and beyond.