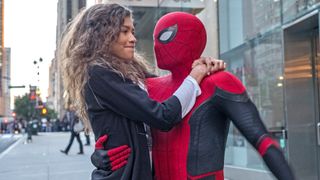 Sept. 17 update: It's time to watch Far From Home on digital download!

Leaving the theater after seeing Spider-Man's latest adventure (its last film before MCU Phase 4) I was split between two thoughts. Firstly, "wow, those mid-credits and post-credits scenes were awesome" and "when is Spider-Man: Far From Home coming out on Blu-ray and digital?"

Of course, since the movie just came out in theaters (and took the #1 box office spot with  $92.57 million), I'm a little early. Fortunately, we can discern a probable release date, thanks to precedent.

When Does Spider-Man: Far From Home Come Out on Digital and Blu-Ray?

Disney formally announced the digital and Blu-ray/DVD release dates for Far From Home:

The biggest Spider-Man movie ever just got BIGGER with over an hour of never-before-seen content, including this all-new short film, behind-the-scenes & more! #SpiderManFarFromHome swings onto Digital 9/17 and Blu-ray, DVD & 4K Ultra HD 10/1. 🕷️ https://t.co/szDozgUZv7 pic.twitter.com/G2mTY8wUkLSeptember 3, 2019

Will Spider-Man: Far From Home come out on Disney Plus?

That's a negatory, true believers — especially in light of Spider-Man leaving the MCU. Plus, Spider-Man: Homecoming wasn't mentioned at the Disney Plus investor event where The House of The Mouse previewed its upcoming services, and that's likely because Sony Pictures owns these Spider-movies, and already put Homecoming on Starz.

Wait, Far From Home is coming back to theaters?

On August 29, Sony will re-release Far From Home in the U.S. and Canada. Why? Well, this new version, just like Marvel Studios did with Avengers: Endgame, will feature extra footage. Deadline reports that this cut features a 4-minute action sequence that you'd have to wait for the digital and Blu-pray releases to see.