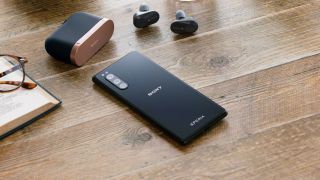 Revealed today (Sept. 5) at the IFA trade show in Berlin, the 6.1-inch, triple-camera Xperia 5 incorporates many of the Xperia 1's creative production features into a smaller package. Granted, it's not that much smaller — the Xperia 1 measured 6.5 inches, after all — though it does follow in a long Sony tradition of building flagships that you can actually use comfortably with one hand.

Like other recent phones from Sony, the Xperia 5's full-HD+ display carries a 21:9 aspect ratio. That means the device is narrower than your typical 6.1 inch phone when held in portrait orientation, and can accommodate the full width of films when viewed in landscape. It's also an OLED panel as well, and supports HDR for improved color gamut and contrast.

As for those triple cameras, the Xperia 5 benefits from the same system as the larger Xperia 1, with 12-megapixel sensors all around, tied to standard, ultrawide and telephoto lenses.  That's somewhat encouraging, but it also gives us pause. While my colleague Caitlin McGarry did take some photos she was pleased with when she reviewed the Xperia 1 earlier this year, she also said the low-light performance was inconsistent, and the app was sluggish in general. Hopefully, Sony can optimize the software this time around.

For what it's worth, the Xperia 5 does bring new photography tricks to the table, like improved noise reduction when shooting in RAW mode, as well as Eye Autofocus. Inspired by technology already used in Sony's professional-grade Alpha cameras, Eye Autofocus prioritizes, well, focusing on the subject's eyes — something Sony says is crucial for good portraits. For now, we'll take the company's word for it, though we'll certainly compare the Xperia 5's portraits against the competition's as soon as we're able. Videographers can also expect Sony's trademark CinemaPro app for a deeper editing experience.

Under the hood, you'll find a Snapdragon 855 processor with 6GB of RAM and 128GB of storage standard. Dolby Atmos audio procesing provides some surround sound oomph to your media, while Game Enhancer — a feature that debuted on the Xperia 10 earlier this year — makes sharing and recording gameplay clips easier. The 3,140 mAh battery supports USB PD charging, and Sony says it can reach 50% capacity in 30 minutes.

The Xperia 5 will be sold in black, blue, gray and red, though it's currently unclear which colors will be sold in each country. The phone is currently slated for a November release, and it'll cost $799 from Best Buy, Amazon and B&H. The Xperia 5 will be compatible with all GSM networks, including T-Mobile and AT&T, though Sony says it's also certified to work on Verizon's network.

At $799, the Xperia 5 will receive steep competition from the iPhone 11, should Apple maintains the $749 starting price for its 6.1-inch phone, which is slated to be announced next week. Additionally, the Galaxy S10e also offers a charmingly compact flagship experience for $50 less than Sony's latest. We look forward to finding out how the Xperia 5 measures up against those juggernauts in a few months' time.