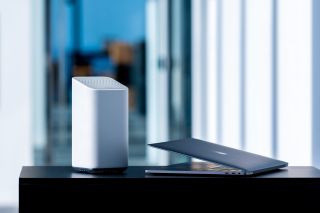 A new year brings new announcements of several major new products from router makers, covering everything from standalone routers to fancy mesh Wi-Fi systems. And there's a lot to be excited about, as home Wi-Fi gear embraces new technologies like Wi-Fi 6, easy mesh expansion and even 5G connectivity.

Everything is about to get a lot faster, while routers will be able to handle more devices, deal with heavier data loads and even provide wider coverage areas. And these routers are going to do all of this while staying pretty affordable, as several of the new devices and mesh systems we’ve seen so far will sell for less than you might fear for newly announced products.

Here's a quick rundown of the routers and Wi-Fi devices we're most excited for in the coming year, and which could show up again among our picks for the best Wi-Fi routers later this year.

The latest from Arris is the SURFboard mAX AX6600 mesh Wi-Fi 6 system, a two-pack of mesh units that deliver Gigabit speed Wi-Fi to every corner of your home. With Wi-Fi 6 speeds and tri-band functionality, the two-unit system can cover up to 5,500 square feet, delivering speeds of up to 6.6 Gbps, an increase of up to 400% over 802.11ac (now known as Wi-Fi 5). Each unit is outfitted with two Ethernet ports, providing wired connectivity for network attached storage (NAS) devices, printers and other products that benefit from a direct connection.

The third band serves as a dedicated backhaul channel between the mesh units, ensuring the fastest performance available across the entire mesh network. And for voice-controlled convenience, the SURFboard mAX AX6600 will also work with Amazon’s Alexa, provided you already have an Amazon smart speaker at home.

The Arris SURFboard mAX AX6600 will go on sale sometime during the second quarter of 2020, and while specific pricing has not been announced, it's expected to cost less than $550.

Asus has released a trio of products under the new ZenWiFi brand, ranging from mesh routers (in both Wi-Fi 6 and 802.11ac flavors) to an Alexa-infused model called the ZenWi-Fi Voice.

The ZenWiFi mesh routers offer expandable coverage to deliver a Wi-Fi signal to your entire home. The ZenWiFi AX (XT8) is a tri-band mesh system that offers up to 6,600 Mbps across one 2.4GHz band and two 5GHz bands, along with a dedicated backhaul at speeds up to 4,804 Mbps. The ZenWiFi AC (CT8) offers similar mesh connectivity, but uses the more common 802.11ac connection standard.

Features like MU-MIMO and OFDMA ensure better performance in high-congestion areas, like apartment buildings and dense urban areas, while Asus' AiProtection Pro feature secures everything from hackers and malware with protection backed by Trend Micro. The ZenWiFi even has parental controls baked in. The mesh units are available in white or graphite black, and will begin selling in the first quarter of 2020.

The ball-shaped ZenWiFi Voice also adds hands-free controls to the router with a mesh node that has Amazon Alexa built-in. The device can be added to any Asus AiMesh system, and features touch-sensitive volume controls to adjust speaker volume. The smart speaker capability lets you add Alexa capability to a room that may not already have an Amazon Echo or similar device, while also opening up new capabilities for a router, like streaming music and controlling smart home devices.

Aimed squarely at Xfinity cable internet subscribers, the new xFi Advanced Gateway is built for 4K streaming, cloud gaming, and more, and is the first Wi-Fi 6 certified product available from Comcast. Designed to bring Wi-Fi 6 connectivity to the thousands of customers that rent their networking gear from Comcast, this combination modem and router isn't available to everyone – only Comcast subscribers who are on 300 Mbps or higher monthly plans can get the new hardware when it rolls out in January.

The square pedestal-shaped unit has four simultaneous dual-band antennas inside, offering plenty of speed for data-heavy uses and smart homes that rely on continuous bandwidth for connected functions. Bluetooth LE and Zigbee radios allow efficient connectivity to a whole houseful of connected devices, and a combination of Ethernet ports (one 2.5 Gbps, three 1 Gbps) deliver plenty of speed for everything else.

The xFi Advanced Gateway will also be fully compatible with the whole range of xFi offerings, from Comcast's xFi Pod mesh extenders to the xFi Advanced Cybersecurity service (at no charge to subscribers) and can be monitored and controlled through the xFi mobile app.

D-Link announced a number of new products at CES 2020 in January, from the relatively basic DIR-X1560 AX1500 Wi-Fi 6 Router to the DIR-X5460 Smart AX5400 Wi-Fi 6 Router and the COVR AX1800 Wi-Fi 6 Mesh System. But while these products look like traditional standalone routers and sleek mesh units, the secret is that every single one is mesh-capable.

The DIR-X1560 AX1500 Wi-Fi 6 Router is a dual-band unit that delivers up to four simultaneous streams that can handle 4K video, online gaming or video chatting without disrupting other users on the network; it also boasts speeds of up to 1.5 Gbps and built in Quality of Service (QoS) traffic management.

The powerful DIR-X5460 Smart AX5400 Wi-Fi 6 Router offers many of the same capabilities, but with higher overall throughput, a triple-core processor to handle advanced functions and 128-bit encryption built in. Both devices are mesh capable, and can be paired with any other EasyMesh router to extend coverage throughout the home.

The COVR-X1870 AX1800 Wi-Fi 6 Mesh System extends this further, with a ready-to-go dual-band mesh system that can cover up to 6,000 sq ft with a standard 2-pack of mesh units. It supports Ethernet backhaul for faster performance and delivers Wi-Fi 6 coverage to the entire house. But if you want to expand your coverage farther, any of D-Link's 2020 products can be added to the mesh network to widen coverage.

D-Link will be releasing these products throughout the year, with the DIR-X1560 coming in the first quarter, the COVR-X1870 coming later this spring, and the DIR-X2460 coming this fall.

Security and family-focused Gryphon is releasing the new Gryphon Guardian this month, a new compact version of its Gryphon Secure mesh router, a favorite of ours from 2018.

The new model offers all of the same functionality in a more compact package. By switching from tri-band to dual-band connectivity the device is able to offer adequate in-home coverage in a fairly small individual mesh unit, and is packed with all of the security features Gryphon has to offer.

This includes parental controls that let you allocate internet time to specific users and devices, complete with features like scheduling homework time or providing an allowance of time with specific apps that is automatically tracked and disconnected when time is up, as well as robust security features such as built-in malware blocking, VPN capability both in the home and away, and protection for all of your connected devices.

The new Linksys Velop WiFi 6 updates the mesh system with AX-class speeds of up to 4,200 Mbps. Coming in packs of two, the Linksys Velop AX4200 offers up to 3,000 square feet of coverage per unit, and can handle up to eight simultaneous streams with enough bandwidth for streaming 4K video.

Linksys will also be offering the new Linksys Velop 5G Mesh Gateway later this year, which combines the speedy mesh system above with a 5G home gateway that lets users set up a stationary access point for wireless 5G data connectivity.

The new 5G unit will also work with existing Velop mesh systems, allowing you to either share that 5G data throughout the home as your primary internet connection, or to serve as a backup networking connection when cable or DSL falters. Pricing and availability dates for the Linksys Velop 5G Mesh Gateway have not yet been announced.

The Netgear Nighthawk Mesh WiFi 6 System brings blazing speeds and easy expandability to even the largest of homes, with a compact dual-band design that can push speedy Wi-Fi signals to the farthest rooms of your home. Made with multiple-user households in mind, the mesh system boasts combined speeds up to 1.8Gbps, and is outfitted with a pair of  Gigabit Ethernet ports (one LAN, one WAN).

Each unit measures just a few inches square, but offers Wi-Fi 6 connectivity for up to 3,000 square feet. The two-unit starter pack includes one base unit and one satellite node, though the system can be expanded with additional nodes for broader coverage.

Netgear has also (finally) combined its dual apps into one, giving you a single app to set up the new Nighthawk devices, monitor your network traffic and adjust security settings from your phone.

TP-Link's Deco line of mesh routers has been a solid option for anyone looking for whole-home Wi-Fi, but the newest Deco models might be the best yet. The trio of Deco mesh routers all offer Wi-Fi 6, allowing faster overall performance and connectivity for many more devices than the older 802.11ac (aka Wi-Fi 5) standard could support.

The Deco X20 is the most basic model, with dual-band connectivity with a relatively modest  AX1800 rating. Designed for the budget conscious, it's one of the most affordable Wi-Fi 6 options we've seen, selling for less than $200.

The Deco X60 is the mid-grade option, selling for $269 for a pair of units. The tri-band system offers decent speeds and coverage up to 5,000 square feet.

The Deco X90 is the best of the bunch, with a tri-band design that can deliver multi-gigabit speeds and cover up to 6,000 square feet. With speeds of up to 574Mbps on its 2.4GHz network and 1,201Mbps and 4,804Mbps on its first and second 5GHz networks, respectively, the Deco X90 promises some of the best performance we've seen in a mesh router. And where many mesh systems will have a dedicated channel for use as a data backhaul between units, TP-Link instead uses what it calls dynamic backhaul, spreading the load across the router's 2.5-GHz band and two 5GHz bands.