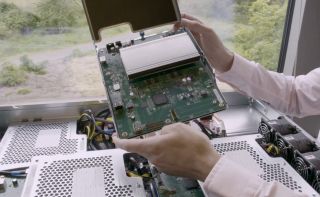 Microsoft is taking a seemingly surprising but logical approach to build its xCloud online gaming platform: instead of using generic, highly optimized servers, they are actually stacking up Xbox One S units inside server farm racks.

Like Google’s Stadia, the xCloud platform will allow anyone to run high-performance, high-definition games on any compatible device regardless of its power. As long as your thingamajig is supported and you have a good internet connection, your game will play on Microsoft’s servers and you will receive a streaming video on your phone, tablet, or TV.

The surprise here — as the hardware is not really optimized for farm operation — is that Microsoft is staking up actual Xbox One S consoles on server farms rather than using more conventional hardware.

He describes how the company engineers took eight consoles and crammed them into a 2U rack box equipped with power units and fans. Microsoft is populating server farms with thousands of these boxes.

This means that, if you use xCloud, the games will have to be made for the Xbox One.

Chourdhry claims that Microsoft started its journey to the cloud when they put an Ethernet port in the original Xbox — which is kind of a stretch because nobody was thinking about cloud game delivery then, but that’s ok. He also argues that cloud is the next natural step for gaming, telling Fortune that we used to live in a world in which games were just a product: put it in a CD, ship it to stores, and the relationship with customers ended there.

Now, he says, we have games as a service in which you are constantly updating games and interacting with your customers. And since servers and connections are fast enough, why not have a service that allows anyone to play any games anywhere they want at any time they want? As long as “any” is an Xbox game, that’s exactly what we are getting this October.