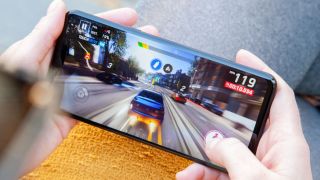 The LG G8 ThinQ is a fine smartphone, though its regular price of $820 is much too high for its gimmicky extra features and cameras that don't quite match up to those in the Pixel 3 or iPhone XS. Fortunately, Prime Day is taking care of that for us.

LG's flagship is on sale for a much easier-to-stomach $499 for Prime Day only. What's more, this is a fully unlocked model, which means it'll work on any carrier that allows you to bring your own phone.

At almost half off, the G8 is a steal. For only $20 more than Google's Pixel 3a XL with this deal, you're getting a handset with a Snapdragon 855 processor, which is the fastest in any Android phone, as well as 6 GB of RAM to ensure it handles demanding games and all manner of tasks with ease. The G8's 6.1-inch OLED display is among the prettiest on the market, and even uses the display glass to amplify audio, rather than a traditional speaker.

LG G8 ThinQ (Unlocked): was $849 now just $499 @ Amazon
With a powerful Snapdragon 855 processor, capable dual cameras and a gorgeous OLED display, the G8 is an absolute steal for almost half its regular price on Prime Day.View Deal

No, the G8 isn't perfect — you'll probably want to avoid Hand ID, LG's half-baked attempt at air gestures, at all costs. Also, the battery life is improved from LG's previous handsets, though can't quite match up to leaders in the segment, like Apple's iPhone XR or Huawei's P30 Pro.

Still, there's a lot to like here. You're getting a premium smartphone with a headphone jack, wireless charging, IP68 water resistance, 128 GB of storage and high-grade, shatter-resistant Gorilla Glass on both sides, for $350 off. And while the G8's 12-megapixel, ƒ/1.7 main lens might not be our favorite among leading handsets, it does benefit from AI modes that can punch up images depending on the scene, as well as a complementary wide-angle shooter that can capture dramatic landscapes.

This is one of the finest smartphone deals we've seen thus far on Prime Day, but keep an eye on our deals hub for even more opportunities to save on your next handset.