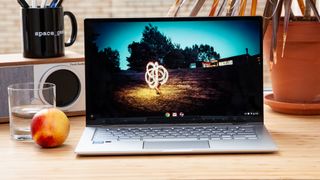 The Asus Chromebook Flip C434 is the best Chromebook on the market. Yes, there are cheaper Chromebooks available, but if you want style and performance — no other machine can top the C434. Simply put, it's one of the best laptops of 2019.

Asus Chromebook C434: was $569 now $499.99 @ Amazon
The Editor's Choice Asus Flip C434 offers the right mix of style and performance in an affordable package. It's the current king of Chromebooks and it's now at its second-lowest price ever.View Deal

On paper, the C434's specs may not seem all that impressive. It packs an Intel Core M3-8100Y CPU, 4GB of RAM, and a 64GB eMMC. However, sister site LaptopMag reviewed this same configuration and gave the machine its Editor's Choice award.

The 2-in-1 sports a matte-silver aluminum finish with chrome trim that looks as elegant as some of Asus's pricer ZenBooks. The barely-there bezels help the screen pop out. They also help minimize wasted space, which in turn makes this one of the most compact 14-inch laptops around.

Performance-wise, the machine packs enough horsepower to run 18 Google Chrome tabs while watching a live 1080p stream alongside three other HD streams. It also lasted for an impressive 9 hours and 58 minutes on our battery test, which beats the lofty category average of 9 hours.

In a nutshell, this machine is perfect for just about all users (excluding gamers, of course) and is a steal at this price.