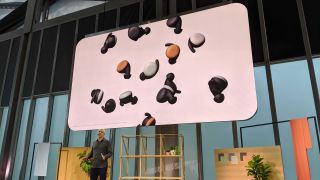 Google is coming out with new Pixel Buds, and it sounds like the company took the criticism of its original wireless earbuds to heart.

The original Pixel Buds, released two years ago, packed in a lot of smarts, including the ability to translate conversations on the fly. But audio was only so-so and the earbuds weren't even truly wireless, as they were connected by a cable that draped across your neck.

Google says it scanned thousands of ears to come up with a design that fit a majority of people comfortably. The Pixel Buds 2 will fit flush in your ear instead of jutting out, with a stabilizer arc and interchangeable tip helping create a secure fit.

As for sound quality, Google is promising rich bass and clear highs, augmented by the Pixel Buds creating a seal against your ear to hold in audio. There's a spatial vent in the new Pixel Buds that let in enough environment sound so you're still aware of the world around you. The Pixel Buds 2 features adaptive sound that can adjust to your surroundings — raising the volume as you leave a quiet room for the noisy outdoors.

Each earbud features two beam-forming microphones that kick into action when you use the Pixel Buds to field a call on your phone.

Speaking of your phone, it doesn't need to be nearby for the Pixel Buds 2 to do their thing. Google says the earbuds feature a long-range Bluetooth connection that should allow you to leave your phone indoors or in another room while the Pixel Buds continue to work. Inside, you'll be able to stay connected from three rooms way, and outside, the Pixel Buds stay connected to a phone up to 100 yards away.

You'll be able to summon the Google Assistant with a wake word ("OK Google") and those translation skills that impressed us in 2017 are back.

While Google has clearly designed its earbuds with the new Pixel 4 phones in mind, the Pixel Buds 2 will work with any Android device running Android 6 or later. The Pixel Buds 2 are also compatible with devices that support Bluetooth 4.0+, including laptops, tablets, and even the iPhone.

Google promises 5 hours of battery life for listening. That extends up to 24 hours when you use the Pixel Buds 2 wireless charging case.

The $179 asking price for the Pixel Buds 2 may raise a few eyebrows. That's $20 more than Google charged for the original Pixel Buds, and also more than $158 you'd pay for Apple's AirPods 2 if you opt for a standard carrying case. (With a wireless charging case, the AirPods cost $20 more than the new Pixel Buds.) Samsung's Galaxy Buds cost $129.

You'll have a choice of four colors, with the Pixel Buds 2 available in Clearly White, Oh So Orange, Quite Mint and Almost Black. (That's white, orange, mint and black, if you're not familiar with Google's naming schemes for colors.)

It will be some time before we find out if Google's new Pixel Buds are worth the $179 cost, as the new earbuds won't arrive until next spring.

Stay on top of everything Google announces at its hardware event by checking out our Made By Google live blog.