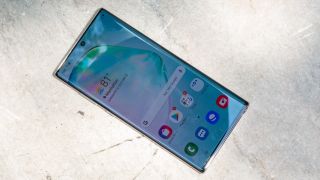 Samsung's new Galaxy Note 10 Plus sports an efficient processor and super-sized battery that can keep the phone powered up a long time before it needs a recharge. And according to at least one drop test video, the Note 10 Plus should also last a long time if it slips out of your fingers.

That's based on testing conducted on the PhoneBuff YouTube channel, which pitted the Note 10 Plus against Apple's iPhone XS Max in a series of drop tests. Samsung's latest phone edged out the iPhone, with eye-opening results in one test in particular.

That'd be the final test shown in the 5.5-minute video, in which the Note 10 Plus is dropped ten times onto a steel platform from a 1.5-meter height. The Note 10 Plus does not come out looking pretty from that test, but even though its screen and back are visibly cracked, the phone is still usable after those 10 drops.

The camera works on the Note 10 Plus, the screen is responsive, and even the in-display fingerprint sensor remains operational. (That sensor stopped working on the Galaxy S10 Plus when PhoneBuff ran its drop test on that phone earlier this year.) In contrast, a portion of the iPhone XS Max's screen became unresponsive after three drops.

As for comparisons to the iPhone XS Max, the Note 10 Plus fared better when both phones dropped face-first from 1 meter. While it experienced some cracking in the lower left corner and a barely visible hairline crack, the iPhone XS Max suffered more extensive screen damage. Apple's phone did fare better than the Note 10 Plus when dropped on its side and back, though.

Neither the iPhone XS Max or the Note 10 Plus are the most durable phones that PhoneBuff has tested. According to the site's drop test rankings, the iPhone 8 has performed the best on the drop test, followed by the Galaxy S9 Plus.

The Note 10 Plus' advantage over the iPhone XS Max could be short-lived. Next month, Apple will release the iPhone 11 lineup, and the latest rumors about Apple's iPhone plans suggest that improved durability will be a major focus for at least some of the models Apple releases.

According to a report last week from Bloomberg, the iPhone 11 Pro models — the successors to the XS and XS Max — will feature "shatter-resistance technology" that will help the phones withstand drops more readily that previous iPhones. Apple will also reportedly boost the water-resistance of its new phones, so that the iPhone 11 models can withstand more than 30 minutes underwater.