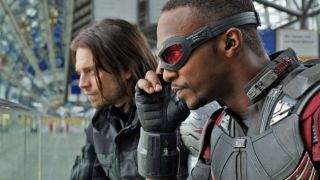 Marvel Studios' Phase 4 slate — Black Widow! Eternals! Mahershala Ali as freakin' Blade! — is full of surprising and incredibly promising movie projects, but that's not what has me excited for the future of the Marvel Cinematic Universe. My Hawkeyes are on Disney Plus.

I'm far more jazzed about staying home and binging on Marvel's upcoming slate of Disney Plus shows, which could be the first Marvel TV properties that have an actual impact on the larger live-action world that Marvel has been crafting since 2008.

Marvel has been making MCU-adjacent television since 2013's Agents of SHIELD, which resurrected early Marvel movie staple Phil Coulson (Clark Gregg) to lead a squad of super-spies. But aside from a game-changing crossover with 2014's Captain America: The Winter Soldier, Agents of SHIELD has rarely interwoven with the larger stories being told on the big screen. And neither has any other TV show under the Marvel Cinematic Universe banner.

On Nov. 7, Kevin Feige confirmed that Disney Plus' Marvel shows will matter to the next MCU films, in significant ways.

Netflix gave us a gritty, interconnected world of its own with shows like Daredevil, Jessica Jones and The Defenders, but aside from a few offhand references to the Battle of New York from The Avengers, these series largely existed in a bubble.

The same goes for titles like Runaways and Cloak & Dagger, which are enjoyable enough on their own, but don't feel like an integral part of the universe. As my colleague Marshall Honorof explained, if you watched every Marvel show hoping for some big movie tie-in, you probably feel like you wasted your time.

Enter Phase 4 and Disney Plus. During the big Phase 4 reveal at San Diego Comic-Con, Marvel Studios head Kevin Feige revealed that upcoming TV shows such as Loki, WandaVision and Hawkeye would be in the same cinematic timeline that features new movies like Eternals and Black Widow.

Editor's note: To learn different ways of watching Phases 1 through 3, check out our guide to watching the Marvel movies in order. We've got them listed by release date, in-film chronology and Rotten Tomatoes scores.

Because these shows will flesh out the stories of existing MCU characters, it already feels like they matter more than any other small-screen Marvel Cinematic Universe project to date. We already know that Hawkeye as well as The Falcon and The Winter Soldier will explore periods both before and after Avengers: Endgame, and that WandaVision will lead directly into Doctor Strange and the Multiverse of Madness on the big screen.

Perhaps just as importantly, these shows will let us get to know many of the characters in the MCU's supporting cast in a way that the films simply didn't allow for.

Sebastian Stan's Winter Soldier has been severely underutilized in the movies, so getting to see him work with Sam Wilson (Anthony Mackie) to fill the void left by Captain America should be a real treat. The same goes for Jeremy Renner's Hawkeye and Elizabeth Olsen's Scarlet Witch, who have spent far too much time as backup players. And how can you say no to more of Tom Hiddleston's Loki, who will now be on a zany alternate-universe adventure?

Could Marvel's upcoming lineup of Phase 4 shows ultimately be as inconsequential as what we've gotten on ABC, Hulu and Netflix? Possibly. But now that Marvel and Disney have their own streaming platform and are talking about these shows in the same breath as the movies, it looks like we could finally get a series of small-screen adventures that are just as integral to the larger MCU as what we'll be seeing in theaters.