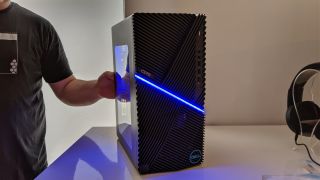 Dell's G-Series line is expanding outside of the realm of laptops and making its way into its first gaming desktop. Meet the Dell G5 Desktop, a spiritual successor to the Dell Inspiron Gaming Desktop.

This beasty is launching August 21 and will be available starting at $749.

The best part about starting with a lower end model is that Dell gives you the ability to upgrade your system. To that end, the company as made the system easily accessible via two thumb screws. And if you want to see what's inside your system all the time, you can shell out a little extra to get a clear side door.

So why go with the Dell G5 Desktop instead of building a PC with your own custom tower? Well, the G5's tower is sleek and compact, at 16.7 pounds and 14.45 x 6.65 x 12.12 inches. But it also features an intricate design on the front end with perforations designed to increase airflow. The only downside is that the G5 is limited to blue LED lighting on its front panel. And the Abyss Dull Grey paint job feels too standard.

Like the rest of the G-Series, the Dell G5 Desktop is also going to be shipped out with Alienware Command Center, which means you can customize lighting, audio and performance profiles for specific games all in one place.

We're pretty excited to get our hands on the Dell G5 Desktop and see how it holds up against our tests. Stay tuned for the full review and benchmarks.