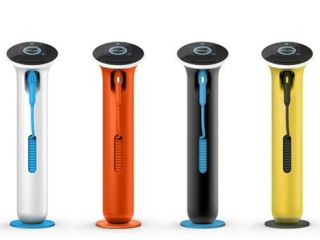 Essentially a durable metal stalk with touch-screen controls and a retractable cable, the WattStation from designer Yves Béhar and GE is designed to make life a little easier for electric car drivers. Other than indicating how full the car's battery is, the WattStation also uses a color-coded LED ring around the screen to make status checks effortless.

At a glance, the user can see if the station is available (white), still charging (red), done charging (green), or out of order (yellow). The WattStation can also share its activity online, allowing users to keep track of the charging process through their internet-capable devices.

GE plans to put up the WattStation throughout the world, concentrating first on areas in Europe, the U.S., and Asia where electric cars are relatively plentiful. To accommodate different urban settings, it will come in at least four colors.