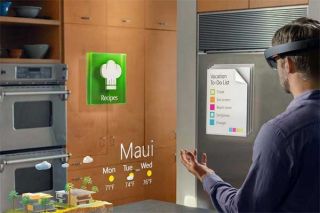 It's a good week for those willing to spend a ton of money on high-tech headsets. The $799 HTC Vive is finally up for preorder, while Microsoft is launching a $3,000 developer version of HoloLens. Also, Brita debuted a new water pitcher that automatically orders new filters for you, and there's a refreshed Raspberry Pi that packs 10 times the power in the same card-sized design. Here's what's trending in tech.

Google's self-driving cars had a pretty good track record about not causing accidents, but that all changed a few weeks ago. On Feb. 14, one of the company's autonomous Lexus R450h rammed into a bus near Google's Mountain View, CA headquarters. Fortunately no one was hurt, but the accident did expose an error in which the self-driving vehicle assumed that the bus would allow it to merge into the center lane. Google promised to tweak its autonomous car software to prevent such incidents in the future, but it certainly seems like we'll have wait just a bit longer before self-driving cars safely rule the entire road.

If you've got $800 lying around and are really excited about virtual reality, today's your big day. The HTC Vive VR headset is now available for pre-order for $799, which gets you the headset, two wireless controllers, and a bundle of games and apps that includes Job Simulator, Fantastic Contraption and Tilt Brush. Orders will start shipping in April, so you've only got about a month to go before you can turn your living room into a 15-by-15 foot virtual wonderland.

The credit-card-sized Raspberry Pi is back, this time with a whole lot more power. Available now for $35, the Pi 3 packs a speedier processor and introduces Wi-Fi and Bluetooth support, making it ideal for builders and hackers looking to make their own robots and smart home gadgets. The tiny PC runs on a simplified version of Windows 10, which could give Microsoft's operating system a slew of cool new uses outside of powering your everyday computer.

Brita's water pitchers are super-convenient for keeping fresh water in your fridge, but only if you keep yours clean. The company is looking to make that process easier with its new $45 Infinity Smart Water Pitcher, which can detect how much water runs through a filter and will automatically order a new one via Amazon Dash once it's time to switch. All you need to do is register your pitcher online and be willing to pay $6 per replacement filter.

Microsoft Selling HoloLens to Developers for $3,000

You'll soon be able to buy a Microsoft HoloLens — well, a select few of you, at least. Eager software creators can apply for the Development Edition of Microsoft's augmented-reality headset, which will start shipping March 30 for a hefty $3,000. The HoloLens developer kit will ship with a suite of apps that includes Skype, 3D creation tool HoloStudio, and Fragments and Young Conker — two games that turn your own home into interactive levels.

Microsoft Takes Jabs at Apple — With Help From Bug Ladies

Microsoft never shies away from a chance to take a subtle jab at Apple, and the company's latest Windows 10 commercials are no exception. The commercials star "The Bug Chicks," a duo of educators who talk about how useful Windows 10 can be for helping them teach kids about insects. Every clip ends with some sort of "my Mac doesn't even do that" comment, whether the two are praising Windows touchscreen devices or gushing about Cortana's cool voice controls (though Microsoft should watch out — Siri is coming to the desktop soon).