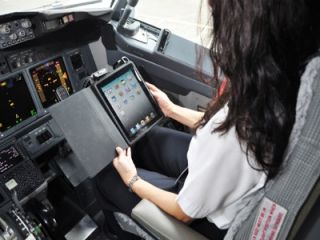 Use a tablet, save a tree.

It's taken decades, but tablet computers are finally here, viable and usable. The industry has tried so many times in the last two decades to make a successful real-life version of something as seemingly fictional as the Star Trek PADD and failed pretty much every time. As with MP3 players and smartphones, it took Apple to come along and show everyone how it's done. Apple wasn’t first in any of these categories, but it sure was popular.

The overwhelming and obvious use for a tablet is as a PC alternative and media consumption device. In the arena of people who need portable computing capabilities but don't want to carry a laptop, the tablet has pretty much killed the netbook dead.

However, some very creative uses for tablets –all right, mostly iPads -- have emerged in the last few months. These new uses for tablets are mostly for information consumption, but they’ve been accomplished in ways Apple, Samsung, Motorola and other tablet makers probably hadn't expected or anticipated. We love it when gadget fans do that!

What these new tablet tasks have in common is that many of them will save a whole lot of paper, which can only be a good thing. So let's take a look at nine unique ways people are using tablets, plus one futuristic suggestion that's so darned crazy it just might work. Let us know in the comments section if you’ve tried (or tried to try) any of these tablet tricks yourself.

Current page: 9 Things You Haven’t Tried With Your Tablet, Yet