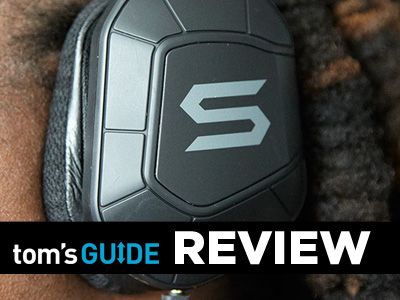 When you think of sports headphones, you probably picture the in-ear variety. However, not everyone wants to jam something in their ear canals while they work out. Packaged in a sweat-resistant, antimicrobial frame, the $199 Soul Electronics Combat+ headphones offer a comfortable fit and audio balanced for vigorous movement. Whether you're sweating to the oldies or prepping for a marathon, read on to find out why the Combat+ are worth a second lap.

If you're looking for flashing lights or outlandish colors, the Combat+ headphones are not for you. The storm-black matte finish — with a gray, oversize "S" emblem on each cup — gives the over-ear cans an understated look. The ear cups resemble turtle shells, thanks to their circular, tilelike design. For those who prefer a pop of color, Soul offers electric-blue and neon-green options that add colorful accents that run along the bottom of the headband, down to the ear cups.

The sturdy plastic headband is bisected in the middle, creating a large window that allows cool air to flow once the workout gets hot and heavy. The underside of the band is lined in black silicon, which makes for a comfy cushion while you exercise. Soul kept the design simple by only adding a single audio jack at the bottom of the left cup.

The middle plate on each cup is held in place by a trio of magnets. Pulling down on the cups reveals metal extenders, enabling the cans to fit just about every head size. The cups are connected to a sturdy metal hinge that allows them to fold inward for easy storage in the included medium-size hard case.

The Combat+ weigh in at 8.32 ounces, which is relatively light. However, at 7.68 ounces, Monster's sport-centric iSpirit Freedom headphones are even lighter. Both sets of cans are sweat- and bacteria-resistant, which comes in handy after a hard workout.

The Combat+'s 49-inch Kevlar audio cable is sweat-resistant and tangle-free. The cable features a large in-line controller with buttons to change, play or pause tracks; adjust volume; and answer or reject calls. Farther down the cord sits a clip to secure the cable to a piece of clothing. The controller works with iOS, Android and BlackBerry devices, leaving Windows Phone users out in the cold.

The most sophisticated part of the Combat+'s design is its speaker covers. The cans ship with two pairs of ear pads: the Comply and the Mesh. Out of the box, the headphones are outfitted with the Comply covers.

It initially took us about 5 minutes to remove the ear pads from the headphones, but that had more to do with our fear of breaking the headphones than the actual difficulty. Once we overcame that fear, it took approximately 10 seconds to pop an ear pad off and less than a minute to switch out both pads.

The Comply ear pads are made from a black foam similar to what you'd find in a memory-foam mattress. The pads are heat-activated and mold themselves around your ears, ensuring a comfy but secure grip as you exercise. This also increases the sound-isolation effect, sealing in sound while blocking out ambient noise.

The Mesh pads are made of soft memory foam wrapped in a soft, black mesh. Instead of dripping sweat, the porous mesh fabric absorbs it, keeping your head somewhat cool. It doesn't form the heat-activated seal as the Comply pads do, but in the midst of an intense workout, we appreciate every bit of relief we can get.

Our favorite part about the Mesh pads is the ability to wash them. When they get too sweaty and/or smelly, you can simply detach them from the headphones and pop them in the dishwasher or washing machine. For the Comply pads, a simple wipe-down with a wet rag or an antibacterial solution was enough to freshen them up.

The headphones also feature a pair of removable ear plates. Soul Electronics has a number of partnerships in the works with professional sports teams to create custom plates that users can swap out with the default plates. The company is also working on a variety of colored plates. However, there's no word yet on pricing or availability for these vanity plates.

When the Combat+ aren't busy fighting off sweat, they're pumping out workout jams. Using 40mm neodymium drivers, the headphones have been tuned to account for a racing heartbeat in the background. To that end, Soul Electronics has toned down the bass in favor of a more balanced sound profile. The headphones also feature a closed design for improved sound isolation.

We took the Combat+ for a 30-minute workout on the elliptical machine and the treadmill with our Nokia Lumia 928. The cans effectively drowned out the gym's generic pop, replacing it with our custom mix. In an effort to stay as cool as possible, we used the Mesh ear pads. Despite our spastic movements on the elliptical, the headphones stayed comfortably in place.

We heard deep bass accompanied by a lively violin on Kanye West's "The New Workout Plan." The bass guitar on Marvin Gaye's "Got To Give It Up, Part 1" was rich, with a warm piano buoyed by the artist's honeyed tenor. However, we lost of the finer nuances of the track, such as the cowbell and cymbals. We also couldn't hear the whispers at the beginning of A Tribe Called Quest's "Start It Up," despite the Lumia 928 being turned up to full volume.

The iSpirit Freedoms are equally capable of drowning out the din of the gym, and we generally preferred their sound to that of the Combat+. While their highs are brighter than we prefer — the violin opening on the Kanye West track was grating at full volume — the Freedoms redeemed themselves on most other tracks.

On "Got To Give It Up, Part 1," the Freedoms delivered deeper bass. Unlike the Combat+, the cowbells and cymbals were loud and clear, as were the whispers on "Start It Up". The Monster iSport Freedomswere generally louder than the Combat+, too.

When using the Combat+ outside the gym (with the Mesh ear pads), we were able to hear the subtle flourishes of "Got To Give It Up, Part 1" and "Start It Up" that we missed while working out. We noticed that Comply ear pads did a slightly better job of delivering the nuances in both instances.

When we listened to "New Workout Plan" on both sets of headphones, the violin on the Freedoms seemed scratchier. The Combat+ also provided a clearer, more balanced performance on "Got To Give It Up." Gaye's vocals also sounded less distorted at higher volumes, whereas the Freedoms consistently encountered difficulties.

However, the Freedoms were the clear winner on "Start It Up," delivering bigger bass and crisper snares than the Combat+.

We made several calls to landlines and cellphones that were loud and clear as a bell on both ends. Background noise was negligible in the gym and on the street, thanks to the sound isolation from the closed ear design.

Soul Electronics has made headphones that are tough enough for athletes or the run-of-the-treadmill fitness buff. For $199, the Combat+ headphones deliver balanced audio in an interchangeable, antimicrobial package. The cans are lightweight and encourage airflow, which is a godsend when it comes to heavy-duty workouts. The ability to wash or wipe the ear pads is a big plus as well.

For $249, the Monster iSport Freedom headphones deliver finer details in tracks during the heat of an intense workout. They also have better volume and deeper bass. However, the Combat+ headphones are a solid choice for fitness buffs looking for relatively balanced audio and the ability to clean off those sweaty ear pads.