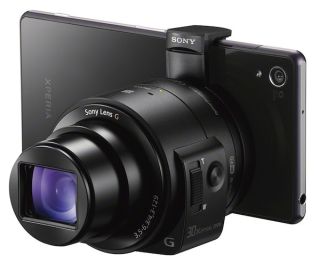 Would you buy a camera that doesn't have an LCD screen? Sony hopes you will with the launch today (Sept. 3) of two new "lens-style" cameras that hook onto a smartphone, which provides the screen and controls. The new line includes the $350 QX30 model with 30X zoom lens and the $400 ILC-QX1, which accepts Sony's Alpha E-Mount lenses for its other mirrorless cameras. Each connects over Wi-Fi to an Android smartphone or iPhone (using Sony's PlayMemories app), which provides a screen and controls. This is Sony's second-generation of lens-style cameras, following last year's 3.6X and 10X models.

Sony gave us a peek at the QX30 (a QX1 was not available). Its zoom is impressive, but usability is debatable.

Sony bills the new cameras as accessories that boost smartphones' photo capabilities. But with each model weighing more than the heaviest smartphone, it's not clear which device is really the accessory. Put another way, are these models just cheaped-out cameras that don't even have their own screens?

The headline model is the ILC-QX1, a cylinder that contains a DSLR-size, 20.1-megapixel APS-C sensor and fits Sony's 17 E-Mount interchangeable lenses. The rump camera's blistering 10 fps burst shooting capability is impressive, but most other specs are a rung down from Sony's other interchangeable-lens cameras. Don't expect the signature superfast autofocus of newer Alpha mirrorless cameras like the $800 a6000 (read review). That requires DSLR-style phase detection technology, but the QX1 has only the more-primitive contrast detection. While it shoots 1080p video, it's at a leisurely 30fps, vs. the 60fps of most modern cameras.

For comparison, Sony's freshly announced a5100 camera costs $549 (without lens, just like the QX1), captures 24MP photos, uses phase- and contrast-detection autofocus, captures 1080p video at up to 60fps, and shoots 6 fps. Plus it has an LCD, buttons and knobs. The a5100 doesn't even weight much more, at 7.9 ounces vs. 7.6 ounces for the ILC-QX1, and remember, you have to add the weight of an attached smartphone to a lens-style camera. (You'll also have to add a lens to both cameras, which take the same E-Mount lens selection.)

The main reason people shoot photos with their smartphones is because they don't have or don't want to drag along a bigger camera. So this is the question for the ILC-QX1: Is it that much less of a burden that people would carry it in situations where they wouldn't want to carry a real camera of about the same size and weight? That seems like a stretch.

The QX30 makes a more immediate upgrade to smartphone cameras, with a massive 30X zoom lens. Nearly all smartphones have an exactly zero-X zoom, unless you crop into the photo. (With a camera like the 41-pixel Nokia Lumia 1020, that's a viable option.) It also shoots stills at 10fps and even captures 1080p video at 60fps. But again, what does this save you? It's still an extra gadget to carry around. How different is it from Sony's Cyber-shot HX50V compact camera, now on sale for $370 — getting an LCD for your camera for just 20 bucks more. This compact shoots the same 20-ish megapixel resolution, 1080 60p video and 10fps stills.

At 9.6 ounces, would seem noticeably heavier than the QX30's 6.8 ounces, but again, remember, you have to add the weight of a smartphone to the QX30. Apple's iPhone 5s for example, weighs about 4 ounces. And at 1.6 inches thick, the Cyber-shot compact is more pocketable than the QX30 lens camera, which is 2.4 inches in its thinnest dimension.

One arguable benefit of the lens-style cameras is that, because you operate them from a smartphone, photo sharing is one-click easy. That's a big difference from the Sony's other cameras with their primitive, janky wireless capabilities. But other camera-makers, such as Samsung and Olympus, have far more-sophisticated wireless capabilities that not only automatically push photos to a smartphone but also allow full control of the camera from a smartphone. In other words, rival cameras do everything the lens cameras do, and even have their own LDCs so you don't have to carry an awkward camera-smartphone combo when you're not in instant-sharing mode.

We got only a very brief hands-on with one of the lens-style models, the QX30. When we do a full review, perhaps we will be blown away by some capability they have. But based on the specs and what we have seen, Sony has a lot to prove in selling these cameras.