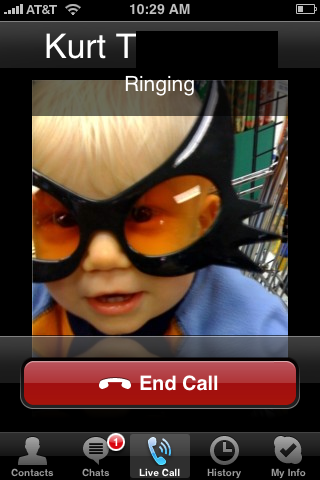 Late last week we wrote about rumors (stemming from a report in GigaOm) that said we could see Skype for iPhone as early as this week. Well, it’s official, Skype for iPhone is (nearly) here, and it looks great.

"The No. 1 request we get from customers is to make Skype available on iPhone. There's a pent-up demand," Durchslag said in a pre-CTIA interview.

It looks like there’ll be some sweet release for those yearning for Skype on their iPhone as the service will launch a version for the device on Tuesday at CTIA. The internet phone company will also share the love with BlackBerry users who can expect Skype for BlackBerry in May.

Once it has the BlackBerry launch out of the way, Skype will have Nokia, Android, WinMo, BlackBerry and iPhone covered. You guys seemed pretty stoked about the news last week. Some of you said you’d been waiting forever for this, while others said you just hoped it would help phone companies realize how ridiculous their prices are.

Those of you rocking an older generation iTouch can (as okibrian pointed out), use Fring coupled with a Bluetooth adapter and headset. Once iPhone 3.0 is released the internal Bluetooth will be enabled and you won’t even need the adapter. Newer iTouches (with microphones) can avail of tomorrow’s release.

That aside, there’s some great screen shots doing the rounds and from what we can see so far, Skype for iPhone looks pretty cool. Check out more on SkypeJournal.