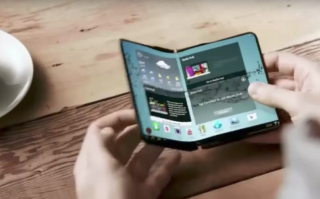 Rumors about the Samsung Galaxy X, the company's first foldable phone, have been hitting with increasing speed, but now a patent application shows us how the thing might actually work.

First discovered by Dutch publication Galaxy Club, the patent shows how Samsung's version of Android will fit on a phone with two screens, and also displays a few potential use cases.

The patent application is stored on the Korea Intellectual Property Rights Information Service, or KIPRIS, and you can view the whole thing here.

There are some really interesting ideas of how a phone would work if it had a second screen. There's a photo of a racing game showing controls on the bottom half and the race on the top (almost like what Nintendo pioneered with its DS handheld), a contact app using the second screen for contact information so you can still browse the full list and, of course, expanded home screens.

There's also a way to show others what you're reading: show text on the front screen and the cover on the rear display, so you can feel smart when people see what book you've got while on the subway.

The patent also suggests you might be able to use the phone kind of like a 2-in-1 laptop, as it shows the phone standing in tent mode.

Samsung has publicly discussed the possibility of a 2018 launch for a bendable phone, so hopefully we see these concepts in a physical device sooner rather than later.