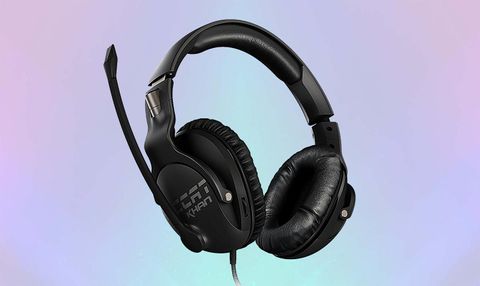 If you're looking for a no-frills headset that sounds great — and if you can stomach the price — the Roccat Khan Pro is a good option.

The Roccat Khan Pro ($100) costs more than it should. There's simply no way around that. The headset looks unremarkable, feels flimsy and makes a few very questionable design decisions.

But if you can get past all that, the Khan Pro is also a solid, no-nonsense peripheral with much better sound than you'd expect from its appearance. In designing the Khan Pro, Roccat focused on sound quality first and foremost, and it's not easy to think of another $100 headset that offers the same level of performance for both games and music.

The Khan Pro isn't quite good enough to be in a class by itself, and it doesn't forge any new ground in the headset space. However, if you're looking for a simple, no-frills headset that sounds really, really good — and if you can stomach the price — the Khan Pro may merit a purchase.

The Khan Pro has a Roccat logo on one earcup, and a lion symbol on the other one. That's about all you get in the way of aesthetic flourishes. Otherwise, this is a very plain headset that comes in a bland gray, a bland white or a bland black. Take your pick.

Like many other high-end PC headsets, the Khan Pro connects with two 3.5 mm wires: one for audio, and one for the mic. An included adapter can consolidate these into a single wire, but I found that the adapter didn't always work as well as intended, with inconsistent performance, depending on the machine I plugged it into. There's also a volume control dial on the left earcup.

The thin headband has a fair amount of padding, while the foam earcups are both large and plush. However, the whole peripheral's construction feels cheap and plasticine. If you've ever bought a decent pair of knockoff headphones at an airport, they probably looked a lot like the Khan Pro.

The microphone, however, is far and away the ugliest part of the whole package. Instead of something retractable or detachable, the Khan Pro's boom mic is a long, thin protrusion from the left earcup. It's pleasantly bendy, but looks and feels insubstantial. There's the tiniest tactile click when you move it upright, which mutes the mic. Given how good the mic sounds (more on that later), it's a terrible mismatch of form and function.

The Khan Pro may not look like much, but it's comfortable, at least. The over-the-ear cups provide a lot of support, while the padded headband makes the whole headset feel very light.

Since you can expand the headband and the earcups swivel, finding the perfect fit is relatively easy. The headband doesn't expand into neat, tidy notches, though, so if you lose your preferred fit, it may take you a while to find it again.

The Khan Pro may not look like much, but it's comfortable, at least.

Otherwise, I found the headset extremely easy to wear for hours at a time, even with my glasses on. I handed the device off to a co-worker, who also pointed out that they were both comfortable and lightweight.

Roccat boasts that the Khan Pro is the first gaming headset compatible with hi-res audio. This is mostly just a marketing term — and one that's notoriously hard to pin down, at that — but it does indeed sound great. Music, sound effects and voice acting in games come through loud and clear, whether you need party chat for esports or immersion for single-player epics.

I put the Khan Pro through its paces with Middle-earth: Shadow of War, Telltale's Batman, StarCraft: Remastered and Overwatch on PC. I also toyed around with The Legend of Zelda: Breath of the Wild on the Nintendo Switch, which demonstrated that the headset works fine with console play as well. With its 3.5 mm adapter, you could plug the Khan Pro into a Switch, PS4 or Xbox One and get full functionality, which is helpful for gamers who don't want to buy two or three separate peripherals.

In terms of audio performance, the Khan Pro delivered in a big way. Music, sound effects and voice work all sounded distinct and balanced, while directional sound in games like Overwatch and Shadow of War helped me pinpoint where my enemies were coming from. The only drawback I found was that there's no separate volume dial for voice chat, meaning that you'll have to do a little manual tweaking in your audio options for multiplayer games.

Since the Khan Pro connects via 3.5 mm audio jacks, there's no software with which to grapple. This is fine, as Roccat's software remains a little cumbersome, even if it has improved considerably in the past few years.

This is one of the best microphones I've encountered on a gaming headset.

The headset's only real "feature," then, is its microphone — which, in spite of its unassuming appearance, is excellent.

The mic produced clear sound and eliminated almost all background noise. My consonants didn't pop; my vowels didn't distort. There was no discernible background hum.

It's a shame that the Khan Pro's voice chat options aren't more granular, because this is one of the best microphones I've encountered on a gaming headset, and I wonder whether the limited options will affect its potential as an esports accessory.

The two-to-one 3.5 mm adapter, on the other hand, was much more mercurial. On the Switch and my smartphone, it worked just fine; on my laptop, it made the audio sound extremely muddled, and didn't let the computer recognize the microphone at all. If your system doesn't have separate inputs for audio and mic, you should seriously consider another headset instead.

Provided that you connect the audio and mic jacks separately, music sounds delightful on the Khan Pro. (If not, it's extremely murky, as discussed above.) I listened to music from G.F. Handel, The Rolling Stones, Flogging Molly and Old Crow Medicine Show, and the headset gave each one a subtle balance of treble and bass, as well as vocals and instruments. The music sounded clear and nearby, rather than distorted and distant, as gaming headsets can sometimes get.

It's a shame, then, that the nonremovable mic makes the Khan Pro somewhat difficult to transport, and the adapter adds an extra step for listening with a smartphone (or on a portable console). That the Khan Pro delivers excellent music isn't wasted, exactly, but it's not leveraged to its fullest advantage, either.

The Khan Pro's design flaws go beyond the aesthetic. There are real problems with the construction of the microphone, and its lightweight construction sometimes feels cheap rather than streamlined. The adapter for laptops, smartphones and consoles is a crapshoot in terms of audio quality.

And yet, the Khan Pro delivers where it counts. The device provides beautiful sound, and the mic is far better than what most gaming headsets offer.

For the same price, you should at least consider the SteelSeries Arctis 5, which provides USB connectivity, and the HyperX Cloud Alpha, which has a much more solid construction. Otherwise, if performance and simplicity are your top priorities, the Khan Pro should fit the bill.