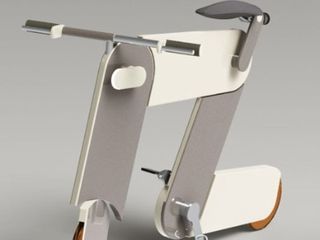 Riding a bike to work sounds like a win-win situation, in theory. It's zero emission, you can weave through traffic, and it counts as a vigorous cardio work out. Despite those pluses, bicycling has one niggling flaw: you won't always have room to pedal, and you have to carry the bike up stairs. Most folding bikes try to solve that problem, but none so creatively as Heesang Ahn's brilliant concept.

The Kart Bike's four main sections fold up into into something akin to a very slim vacuum cleaner. That means no more latching your bike to a stand and praying it won't get stolen; just bring it up to the office and slide it under your desk. You can also just drag it behind you like a suitcase in areas with heavy foot traffic.

In bike mode, the Kart's oval sections give it a quirky, yet oddly stylish look. Even the LED flashlight incorporates the same design elements. The undersized wheels will keep you from hitting breakneck speeds, but still, its alternate carrying mode more than makes up for that.