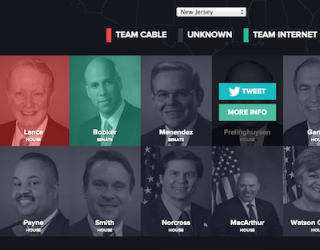 Net neutrality - what's that? My congressional representative - who's that?

A coalition of Internet activist groups, with help from Reddit, is trying to help answer both of those questions for Americans by launching today (Jan. 14) a whopping 535 mini websites — one for each member of the House and Senate. Each highlights how the member stands on regulating Internet access (if they have a stance) to prevent preferential treatment for certain content providers over others. The sites also include ways to contact the politicians, such as buttons for sending Facebook messages or Tweets. They are all accessible from a home page called BattlefortheInternet.com

The time is ripe for lobbying on both sides of the issue, as FCC chairman Tom Wheeler is widely expected to soon propose a plan to regulate Internet access in roughly the same way that public utilities are regulated — under what's know as Title II of the Communications Act of 1934.

MORE: What is Net Neutrality?

Technically, Congress — and the President — has no say in this. The FCC is an independent body, and Wheeler's possible proposal would be only on how to implement existing law, not the creation of a new one. The courts are the only place that the action could be challenged, as has happened twice in the past five years — not in the FCC's favor. And regulating Internet service providers as ISPs is the suggestion offered by the appeals courts that ruled against previous FCC plans that twice tried to accomplish the goal by using a much weaker legal means.

But this being a hotly contested and lobbied political fight, politics will definitely play into the mix. Congress can, for example, withhold or put restrictions on funding for the FCC or other parts of the Executive Branch. President Obama's public statement in favor of tougher Internet regulation on Nov. 10 only pumped up the political tension by putting him at odds with anti-regulatory Congressional Republican leaders. (Being anti-regulation is not the same as being anti net neutrality, opponents often point out; it's about a philosophical difference on how to achieve the goal.)

Given Congress's de-facto power in this issue, advocacy groups Demand Progress, Fight for the Future and the Free Press Action Fund are encouraging people to contact their Senators and Representatives to express support for regulating Internet service providers as utilities under Title II. Some of the 535 congressional pages state clearly if a congressperson is Team Internet, highlighted in green, or Team Cable, highlighted in red — as the activist call the two political sides.

But most politicians fall into the gray, "Unknown" category — including prominent politicians like Diane Feinstein of California and entire states such as Alabama, Alaska, Arkansas, Hawaii, Idaho and Utah.

Of those that, according to the activists, have taken a stance, heavy hitters are on both sides. Among those supporting regulation is a largely Democrat cast including Sens. Charles Schumer and Kirsten Gillibrand (NY), Rep. Nancy Pelosi and Sen. Barbara Boxer (CA), Sen. Elizabeth Warren (MA), Sen. Al Franken (MN) and Sen. Ron Wyden (OR).

The Case Against Time Warner-Comcast Just Got Stronger

Your Guide to Cable TV Cord-Cutting