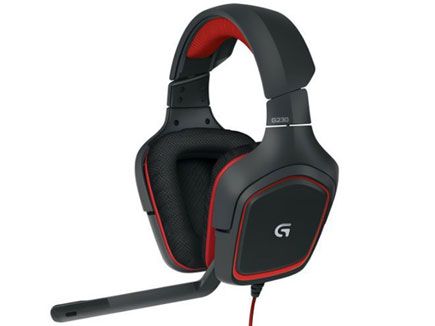 The Logitech G230 is a streamlined gaming headset with good sound quality and a low price tag.

Based on the solid $60 Logitech G430, the G230 ($40 on Amazon) delivers the same good sound and comfortable design as its older sibling, but with fewer extraneous features and a cheaper price tag. Tournament-level players will want a fancier option, but as an entry-level gaming headset at a budget price, the G230 gets an awful lot right.

If you're familiar with the G230's bigger brother, the G430, expect virtually the same design. The two devices are identical except in three respects: The G230 does not come with a USB adapter, has no software and uses red foam padding instead of blue (which I think is awesome; your mileage may vary).

Like the G430, the G230 is one of the most comfortable headsets out there. It features an expandable headband, swiveling ear cups, comfortable padding and a semiflexible microphone. The swiveling ear cups alone put the G230 miles ahead of most competitors, and they actually feel much more secure than their G430 counterparts.

My biggest complaint, as with the G430, is that the headset feels somewhat flimsy overall. Both the plastic and steel are thin. In all likelihood, the device can withstand a little punishment, but I would not be inclined to put it at the bottom of a tightly packed suitcase or play too roughly with the mic.

Swiveling ear cups make a world of difference when it comes to gaming headsets, and the G230 is one of the few models I've reviewed that offers them. The ear cups themselves are a wonder: The over-the-ear design with generous padding keeps them firmly in place without any pressure or discomfort, even over long periods of time.

When it comes to sound quality while playing games, the G230 doesn't disappoint. I tested the peripheral with both Titanfall and Assassin's Creed Unity to see how it measured up. Although the sound was rather flat overall, it conveyed the in-game action perfectly well without hampering my performance in either game.

While Titanfall sounded fine, it did reveal a potential weakness with the G230 for competitive multiplayer games: a lack of directional sound. Although I was not completely sold on the G430's marginal surround sound, it's hard to deny that it helped during competitive multiplayer matches. I could still hear the roar of futuristic guns and robots clearly with the G230, but it didn't help improve my performance.

I had a similar experience with Assassin's Creed Unity. Locking swords with Royalist guards, sprinting through crowds of protestors and diving into bales of hay were all audible and clear, but the sound was not varied enough to make the experience feel immersive. The wonderful music also sounded a bit subdued and prosaic.

If you're trying to listen to a game without disturbing your housemates, or simply don't have very good speakers, the G230 gets the job done. If you need to be a top-tier competitor or experience every game in movielike quality, however, the headset is not quite up to the task.

The headset's only big drawback is its microphone. Without the Logitech software to guide it, the mic sounded extremely quiet and full of static when I tried to correspond with co-workers. It took a lot of tweaking to get it working over Skype. In a heated multiplayer match with lots of other sounds demanding your attention, it could be even more difficult.

The G230 does not use software, but just out of curiosity, I hooked it up to my computer with the USB adapter that comes with the G430. The Logitech Gaming Software mistook the G230 for the more complex G430, and the features worked — to an extent. My recommendation would be to just skip the adapter; the G230 wasn't built for software compatibility, and if you want to toy around with equalization and surround sound, just drop the extra $20 on the higher-end model.

Although the G230 and the G430 should be identical in regard to music, the G230 is actually the better choice. Since the gadget lacks a USB converter, it plugs directly into your computer's microphone and speaker jacks, giving it a cleaner, brighter sound than you would get by running it through a USB port and proprietary software first.

However, you can plug the G430 directly into a computer and get the same sound quality. Doing so does lock you out of some of the G430's unique features, though, which the G230 eschews in favor of simplicity.

I tested the G230 with a variety of music, including Handel's "Messiah" (Baroque) and albums from Old Crow Medicine Show (bluegrass) and Flogging Molly (punk). While the soundscape was not nearly as rich as that delivered by a comparable pair of music-focused headphones, it exceeded my expectations for a gaming headset. The music sounded clear, with a sensible treble/bass balance and none of the reverberation common to this kind of peripheral.

When I reviewed the Logitech G430, I thought it was a good all-around headset, but I noted that some of its features didn't measure up to their full potential. The G230 sidesteps this problem neatly by focusing on what minimalistic gamers need and getting rid of what they don't. The result is a peripheral that's less customizable, but also less expensive, more streamlined and capable of delivering cleaner, more consistent sound.

The G230's limited feature set and weak mic prevent it from earning a higher rating, but for everyday gamers on a budget, it's easily one of the best choices.