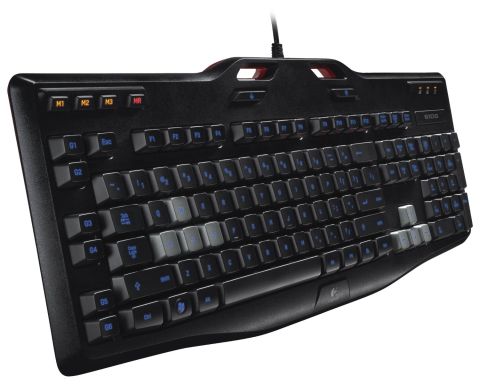 The Logitech G105 has a pleasant design and decent macro functionality, but it's not much better than a standard office keyboard.

Logitech has created some great mechanical gaming keyboards at affordable prices, which makes it somewhat baffling that it would also produce such a sub-par membrane model. The Logitech G105 ($60) is not terrible as membrane keyboards go, but it's not the best choice for people who want to game at anything more than a casual level, and it's a moderately expensive choice for those who do.

The G105 measures a respectable 19.6 x 8.8 inches, making it quite a bit smaller than behemoths such as the Corsair Vengeance K95 (21.5 x 9.6 inches) and bigger than tenkeyless models like the Poseidon ZX (14.3 x 5.6 inches). If your desk can fit a standard office keyboard, it will probably fit the G105.

One of the few noteworthy things about the G105 is its illumination. The box boasts that the keyboard sports three illumination settings, although those are really just bright, dim or off. I reviewed a special Call of Duty: Modern Warfare 3 edition (that's how long the G105's been on the market), which lit up green, but most models have blue lighting — so color coordinators, take note.

A keyboard is only as good as its keys, and this is where the G105 falls down in a big way. Some people really do prefer membrane keyboards, but there's no denying that the membrane keyboard's day as a top-notch gaming peripheral has passed. Membrane offers very little in the way of tactile feedback, and if a switch malfunctions, it's not easy to replace.

If you haven't used a membrane keyboard in a while, I'll remind you why you ditched it: Membrane keys are very quiet, as they take very little effort to activate. They feel mushy and unsatisfying. Unlike mechanical keys, which run the gamut from quiet Reds to explosive Greens, membrane keys come in only one flavor.

The G105 also sports an extra row of six macro keys. I found that these keys were generally easy enough to reach using my left pinky, but I did often click them by mistake when searching for the Esc key.

Arguably the best thing about the G105 is that it works with the excellent Logitech Gaming Software. By using this software, players can customize individual keystrokes, program the macro keys and set up key profiles for individual games. The G105 has three default profiles, but linking games with profiles gives users a theoretically infinite number.

The ability to program individual profiles is always welcome, although there's always the question of how useful most users will find this feature. Making button shortcuts on a mouse makes them more convenient; keyboard profiles only make sense if a gamer plays multiple games with a lot of macros.

Still, setting up profiles is as easy as it can be, thanks to the Logitech Gaming Software scanning your machine and automatically setting up profiles for every game you have installed. The software also recognizes what each key does within each game, meaning that you can assign "Melee" in Titanfall rather than just the C button.

Although it's extremely easy to record macros on the fly, we found that the timing was often off. Queuing up a very specific set of skills in Star Wars: The Old Republic did not work, as the keyboard interpreted all of our commands at the same time rather than a few seconds apart. Programming timed macros in the gaming software worked fine, but it's hard to tell exactly what the timing should be outside of regular gameplay.

Aside from the software, the G105 doesn't have many other defining features. You can disable the Windows key while gaming to prevent accidentally closing out, but this is pretty standard as gaming keyboards go.

The G105 ran the standard battery of Tom's Guide games as well as any membrane keyboard would. I played chunks of Titanfall, StarCraft II: Heart of the Swarm, Watch Dogs, and Star Wars: The Old Republic without any major problems, but nothing stood out as remarkable, either.

Mashing keys repeatedly in Titanfall and The Old Republic was still functional but did not feel as responsive as with a mechanical keyboard. Whether tactile feedback has a significant impact on how you game is a fair question, but there was very little to be had here either way.

For games such as Heart of the Swarm or Watch Dogs, where keystrokes are more measured and precise, the G105 worked just fine. We had no trouble ordering our Zerg armies around a map or toggling through our weapons to take on militia goons in Chicago.

The ability to program macros came in handy for The Old Republic, but as mentioned above, the on-the-fly macro recording did not work as well as we had hoped.

The G105 features six-key rollover, meaning that it can process commands from six keys at once. This isn't as many as some of its competitors, which range up to 10 (one for each digit) and beyond.

There's nothing really wrong with the G105, but it's hard to find any reason to recommend it, either. Membrane keyboards are an affordable alternative to a limited range of mechanical options, but if you're going to dish out $60 for a keyboard that feels bland, you might be better served by holding off until you can afford a mechanical keyboard like the $130 Corsair Vengeance K70, or just getting a regular keyboard for $20 or so.

The G105 has a pleasant design and decent macro functionality, but otherwise, you'd be just as well off with a standard office keyboard.