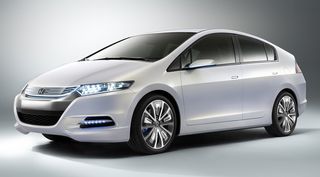 Both Honda and Toyota showed the auto industry that it could be done with the Insight and Prius. Unlike the Toyota solution, however, which is now the top selling hybrid in the U.S., Honda had to put its Insight from market for a rethinking.

Honda’s current fuel-miserly vehicle is the Civic Hybrid – which while good of fuel – isn’t designed from the ground-up for hybrid cleverness.

Enter the 2010 Insight, Honda’s return to the specialized hybrid segment to do battle with the Prius. A concept version of the upcoming car will be on display at the 2008 Paris Motor Show in October. And in typical Honda fashion, the concept vehicle should be a close representation of the final model.

Unlike the old Insight, which was a two-seater, the next-generation car will be a five-door, five-passenger compact hatchback, with a shape that’s not completely dissimilar to the Toyota Prius. What the new Insight will retain, however, is the gasoline and battery tandem power sources.

According to the press release, new will be a “driving support function that helps drivers make the most of its exceptional fuel economy to achieve more efficient, environmentally responsible driving,” which might be programs to curb lead-footed drivers.

The first of the new Honda Insights should be appearing in spring 2009. Best of all, it’s expected to go for $18,500, making it easy on the wallet and the environment.