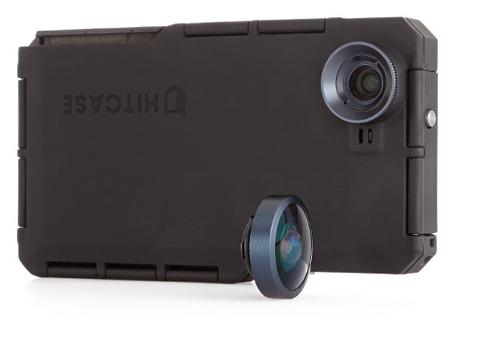 The rugged Hitcase Pro+ will protect your phone so you can capture the adventure shots you've always wanted, worry-free.

Design: Rugged construction protects above and below water

The Hitcase Pro+ stands apart from other lens kits by appealing to the adventurous outdoorsy crowd. Featuring a rugged (and quite large) case with a claimed drop resistance of up to 6 feet and waterproofing up to 33 feet, the Hitcase should please surfers and other aquatic adventurers.  While we didn't go all the way to 33 feet, the Hitcase successfully passed various submersions and a 5-foot fall onto wood flooring, making it the most durable case we've tested.

Protruding from the top is a metal button that activates the lock, with two smaller ones on the side for the volume rocker. A clear plastic screen covers the front of the device, which allows you to control your iPhone while keeping it protected, although there is slightly more resistance when using the touch interface. This even works underwater, where we were able to successfully text, dial and take photos, but you really have to smash your fingers into the screen to make selections.

Other accessories include a wrist strap, small monopod and lens caps for both sides of the lens. The Hitcase features a railside mounting system that fits GoPro action camera mounts. Users can also download the free Vidometer App for their iPhones, which can track speed, altitude, shock, G-force and more.

Ease of Use: Three sturdy latches, and you're in

While Hitcase claims users can get their phone in or out of the case in 3 seconds, the stiff and sturdy latches take a bit of extra effort and time to secure. That isn't necessarily a bad thing, because when the Hitcase is all that stands between the elements and my iPhone, I'll gladly trade an extra few seconds to muscle the latches into place.

Even with the latches secure, the Hitcase allows you to hear audio from the iPhone's speakers within. It also has a removable rubber plug over the headphone jack so you can connect your headphones. Just remember to replace the plug when you're ready to go in the water.

Both the ultra-wide angle and flat lens screw easily into the threaded opening positioned above the camera, although the flat lens seems to be more suited to plugging up the whole in the case than improving image quality

Below is a control shot photographed with the stock iPhone 5s lens, which we used to compare aspects like sharpness, focus and distortion.

Hitcase offers an expansive 3x wide-angle lens that straddles the line between super-wide and fisheye. This lens offers a large view, but starts to take on the round, distorted look of fisheye lens. The lens offers a good compromise for action enthusiasts but suffers slightly from blurriness around the edges.

There's not much to say about Hitcase's flat lens other than the fact that it plugs up the hole in the case, while offering a slimmer profile and standard field of view. In other words, it works exactly as advertised.

The Hitcase Pro+ is similarly priced compared to other rugged systems like the $150 Optrix PhotoProX. The main difference between the two is that the Optrix kit includes four lenses, although it is missing the wide-angled lens that comes with the Hitcase.

Offering essentially just one lens, the Hitcase Pro+ is a bit limited. I'd like it to at least include a telephoto, such as Manfroto's 1.5x telephoto. But given the action-oriented target customer, the Hitcase Pro+ provides a safe house for your phone while giving you the opportunity to capture photos you wouldn't dare take using most other lens kits.