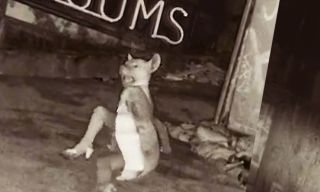 LOS ANGELES — While everyone was going nuts over Resident Evil 7: Biohazard for PlayStation VR at E3 2016, developer Tangentleman was lurking in the wings with Here They Lie. Described as a psychological thriller, Here They Lie will be available as a launch title for PlayStation VR or the traditional console, and I got the chance to take a closer look during this week's gaming expo.

The game puts you on the trail of a mysterious woman named Lily as you journey through a desiccated city. Once I donned the PlayStation VR headset and grabbed the controller, I saw Lily looking resplendent in a yellow dress that complemented her brown skin. As I went to approach her, I sank into the darkness below into an abandoned subway. Horror senses tingling, I went to my only defense mechanism, talking out my fears to co-creative director and lead designer Cory Davis.

As I made my way through the seemingly endless tunnels, I had the distinct feeling I was being watched or followed. However, when I quickly whipped around there was no one there. Then finally, I spotted someone creep behind me wearing an animal mask by going through a previously locked door. I followed the figure knowing it was trap, but hell, this is what demos are for right?

At first, it appeared that my new friend has disappeared into the door in front of me. No sooner had I taken a few steps to investigate, then I heard the door close slowly behind me. Sure enough, it was my new friend in the lamb's mask, only he had a crowbar now. Once he made sure we were alone and could get properly acquainted, he showered me with love taps, until I hit the floor and could only see red, then black.

"Oh look," I said to Cory. "My new friend is bludgeoning me to show me how much he loves me."

When I came to, it seems that I had overstayed my welcome, because my friend had tossed me out the door into another section of the subway. I was sad to see him go and nervously proceeded down the new path, looking over my shoulder every now and then to see if my friend was sneaking up behind me to dish out more crowbar love. But alas, it was just me and my fears, left all alone in the dark with only my flashlight to ratchet up my nerves.

I eventually came to a cave where I spotted my friend bent over what looked to be a corpse. As I watched him inspect his latest victim, I saw a hammerhead shark flying over head. I stared at the craziness taking place overhead for a minute before deciding it was time to try to find a way back to sanity.

I turned back the way I came to find a new door to my right and a blank billboard with what appeared to be a small shadow. Something about that black blotch creeped me right out, so I decided to take the door. When I stepped through the threshold, I felt like I had stepped into the aftermath of that elevator scene in the movie "The Shining" since the floor was covered in bright red blood.

"Looks gooey" I said to Cory, successfully eliciting a laugh. I walked down this menses metaphor until I reached a dead end. That meant I had to walk back to the billboard where the shadow had grown from a creepy dot to a menacing blob. As I looked for a place to run, the once slick floor gave birth to dozens of dead, congealed bodies. Gazing upon that horror, I barely had enough to time to see my new friend emerge from his billboard prison.

But I did see him and he had become a walking flame, with a suit and hat to match. He grabbed me and opened his maw as if he wanted to kiss me or expound about the glory of Cthulu (Ph'nglui mglw'nafh Cthulhu R'lyeh wgah'nagl fhtagn). Whatever he wanted, I didn't have the time to answer or react as I ignited once again, seeing red, then black and then the demo's end.

If you like horror games like I do, I highly recommend checking out the mind-bending Here The Lie when it launches. It's a shriekingly good time.