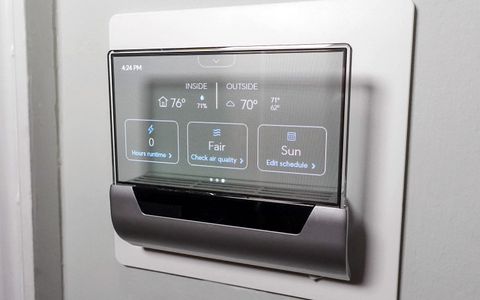 Most smart thermostats have hewed to a traditional design, but Johnson Controls' Glas thermostat embraces the future with a transparent glass touch screen that looks more at home on a starship than in your living room. In addition to changing the temperature, this thermostat can also monitor the air quality in your home, and has Cortana built in. Yet, for all these features — as well as its design — it still left me a bit cold.

My first impression of the Glas thermostat was that it was something pulled off the Enterprise — a clear touch-sensitive display that can also talk to you? Count me in.

When the Glas is inactive, you can see through the 5.5 x 3-inch touch screen to the wall behind. When you walk in front of it, activating a motion sensor, the screen pops to life, showing the  temperature in your home. That's pretty cool!

The Glas Thermostat looks like something pulled off of the Enterprise.

However, its futuristic aesthetic didn't work as well in my 80-year-old colonial. It's not the touch screen itself that's the issue. The bottom section, a piece of silver-and-black plastic that curves up and out from the wall, clashed with the crown moulding.

And, at 5.5 x 5 inches for the entire setup, the Glas is much larger than the 3.3-inch diameter Nest and the 4 x 4-inch Ecobee thermostats.

Installing the Glas was a little more involved than with the Nest or the Ecobee thermostats; you have to drill four holes for the Glas, rather than just two, as with the others. Also, because of its rectangular, rather than square, design, you will likely have to patch some holes in your wall from your older thermostat. The Glas includes a plastic mounting plate to spare you this trouble, but against my green walls, it just looked garish.

From there, you have to connect the wires coming from your system to the Glas' terminals; I wish Johnson Controls had labeled these a bit better. On both the Nest and the Ecobee, it's much easier to see which is which.

Installing the Glas was a little more involved than with the Nest or the Ecobee thermostats.

The Glas' clear OLED touch screen is the biggest selling point of this thermostat; I never got tired of seeing it light up instantly when I walked in front of it. On a more practical note, I found the touch screen to be very responsive, exhibiting no delay when I swiped or pressed.

In addition to telling you the temperature inside your home, the Glas also displays the outside air temperature and climate conditions, as well as the air quality both inside and outside your home. For instance, it measures the level of volatile organic compounds, CO2 and humidity, and if it senses that any exceed a certain threshold, it will suggest actions, such as opening a window or turning on a fan.

Installing the Glas was a little more involved than with the Nest or the Ecobee thermostats.

I found that, with the windows closed and a number of people in the same room as the thermostat, the CO2 levels would increase slowly. If only you could have it automatically turn on a fan when those levels got too high.

However, the Glas doesn't support remote sensors, as do the Ecobee and Nest thermostats; this should be standard issue on any smart thermostat these days.

In practice, I found the Glas less intuitive to use than competing devices. Take, for example, scheduling the thermostat. Click on the scheduling icon on the app, and you're shown a screen with the days listed along the top and the time listed, hour by hour, down the left side. Some of those hours are shaded in; press on the shaded area, and you're brought to a new screen that shows your wake and sleep times for that day.

MORE: The Best Nest-Compatible Products That Will Make Your Home ...

Annoyingly, you can still see the days of the week along the top, but you can't select them. You have to go back to the main screen and select a different day if you want to change the sleep and wake times for it. Also, pressing on the non-shaded areas does nothing. Wouldn't it be more intuitive to be able to drag your finger to select the hours you're awake and asleep?

Aside from its touch screen, Glas' other distinguishing feature is that it has Cortana built in. Unfortunately, Cortana hasn't distinguished itself, especially when it comes to the smart home. It worked well enough, allowing me to change the Glas' temperature by voice command, but I barely used it for anything else. And, considering you can control the Glas using either Alexa or Google Assistant, it's doubtful you'd need — or want  — to use Cortana at all.

Yes, the $299 Glas thermostat looks cool, and I liked that it can detect particulates and CO2 inside my home. However, between the setup and use, it's not nearly as convenient as other smart thermostats that cost less.

If you want a smart thermostat with a smart assistant built in, the Ecobee 4 ($247) costs $50 less, has Alexa inside, and comes with a remote sensor, so you can monitor the temperature in another room in your house. Nest's third-generation thermostat ($200) is even cheaper, has a premium design, and is great at learning your patterns.

Check out the Glas if you like its look, but its functionality falls short.