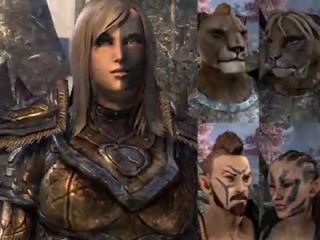 "The Elder Scrolls Online" is gathering huge buzz leading into its early 2014 release, what with its massive online universe and epic battles that are awaiting would-be players. Bethesda Softworks recently unveiled another piece of the puzzle, the character creation system. It's here where people can craft the ideal warrior of their choice.

Art director Jared Carr walks through the various steps of creation in the video below. It's a huge system, allowing you to tweak a number of things on your character, including race, species, body shaping, height, hairstyles and tattoos, as well as the width of shoulders and overall build, in case you feel like having longer legs for durability. With dozens of choices across each category, there are thousands of possibilities in all.

The video didn't quite go into depth about the different armor types available, but, considering it's "Elder Scrolls," you can expect those options to be vast as well.

Look for "The Elder Scrolls Online" on PlayStation 4, Xbox One and PC early next year.