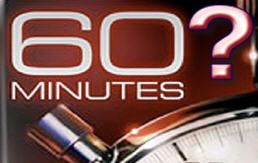 How 60 Minutes Connects The Dots

The Nov. 1 report started out normally enough, with 60 Minutes reporter Lesley Stahl asking the audience, “Where do you think organized crime is making its money these days? With drugs, gambling, and prostitution? Yes, but also - and this may surprise you - the movies.  Mobsters have moved into the movie piracy business and it’s bleeding Hollywood to the tune of billions of dollars a year.”

Stahl then went on to examine the pirating procedure: “The DVDs are made by pirates who often sit in the back row of theaters and record movies with tiny cameras.  Illinois police say Gerardo Arellano did just that… Police say Arellano worked out of his home, where they found more than 13,000 DVDs he had made from his recordings, along with the computers he used to upload the movies onto the Internet.”

That was when I almost choked on my dinner.  Mr.  Arellano allegedly went to movies and recorded them, spent the time and money to duplicate 13,000 copies, and then he gave them away online?  Since when did organized crime bosses give stuff away for free?

So, the people who illegally record movies in cinemas and sell them as DVDs, are the same people that upload movies from their homes?  That is what this 60 minutes piece implied, and that kind of logic required some backup, preferably from an independent third party.  So, who did Stahl turn to for backup? The MPAA (Motion Picture Association of America).

MPAA “investigator” Gary Kissinger chimed in: “Rarely do you see an individual that's involved in all three major components of the piracy activities: in other words, camcording, Internet piracy activities, and also selling the movies on the street as well."

Oh, the people who record the movies aren’t the same people that do the uploading? Or they are? If I—a technology writer by trade—am confused by the assertions here, what sense are grandma-and-grandpa 60 Minutes viewers making of it?