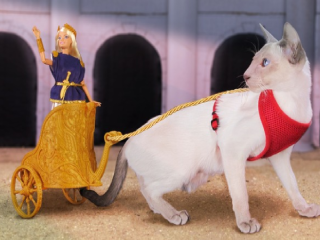 Forget Ken's pink convertible: Barbie has way better wheels now. This 3D-printed Roman-style chariot, currently on Kickstarter, is open-source and can be pulled by cats. Accessories include 3D-printed laurels, a dagger, a trident and gladiator armor, so Barbie looks good when she's riding into battle.

On the Kickstarter, which launched this week, the 3D-printable digital files for the chariot and all of Barbie's accessories cost $25, which you can then create on your own 3D printers. An already-printed chariot in gold plastic costs $75.

The chariot and Roman accoutrements are designed by Jim Rodda, also known as Zheng3. Last year he designed 3D-printed battle armor for Barbie dolls, called Faire Play, and ran a successful Kickstarter selling both 3D prints and the 3D files that users could create on their own 3D printers. Now, he's entitled his Roman Barbie set Faire Play 2.

On the Kickstarter page, Rodda describes the design process for coming up with the chariot: First he built a mockup in cardboard, then designed prototype versions using the computer-aided design software Autodesk Maya.

Everything in the Faire Play sets was designed to fit a Barbie Fashionista doll. The Kickstarter for Faire Play 2 contains several different tiers of accessories: At $20 backers get the Empress Makeover Kit, consisting of a fully 3D-printed dagger, laurel wreath crown, pair of brooches, and a pair of wedge sandals that, when placed on Barbie's feet, will let her stand upright without support.

The digital files for these items are also included, so you can print multiple copies on your home 3D printer. The files are all licensed under the Creative Commons, so Rodda encourages backers to "print a bunch of chariots and hawk them at the nearest gathering of Roman reenactors."

For $25, backers get the digital files for the chariot itself, which needs to be assembled after the print is completed. At $35, Rodda is also offering a custom-made lithopane: a 3D-printed, semi-translucent relief of a photo. Backers can send in the photo they wish, and Rodda will 3D-print the lithopane and send it back.

At $40, in addition to the previously listed files, backers also get digital files for Barbie's more gladiatorial accoutrements: gladius sword, armor and shield.

And at $75 backers get the fully 3D-printed chariot, printed in gold PLA plastic. The chariot "can in theory be pulled by cats," Rodda says. The cat harness is not included — nor is the cat.

Where did Rodda get the idea for this second round of Barbie armor? "Faire Play demonstrated that people enjoy seeing Barbie in non-traditional roles, so revisiting the Barbie-as-warrior trope was a no-brainer," he wrote on the Kickstarter page. "But what else does the Internet like? Cats. I'm told the Internet likes cats."

Jill Scharr is a staff writer for Tom's Guide, where she regularly covers security, 3D printing and video games. You can follow Jill on Twitter @JillScharr and on Google+. Follow us @tomsguide, on Facebook and on Google+.