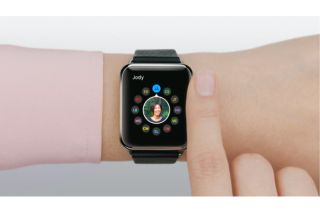 We don't know how many Apple Watches Apple sold during its last fiscal quarter. But after Apple announced its third quarter numbers today (July 21), we have a better idea of the company's big plans for its little smartwatch.

"This is just the beginning of what this new platform can deliver," Apple CEO Tim Cook said as he walked Wall Street analysts through some of the numbers surrounding the Apple Watch's performance over the three months since its April release. "It's a rare and special privilege to launch a new platform with such potential."

Apple never planned to give exact figures on Apple Watch sales -- Apple executives say that's to avoid giving rivals too much insight into its business, though critics counter that it also lets Apple avoid disclosing numbers if sales disappointed. Cook insists that's not the case, pointing out that Apple Watch sales exceeded Apple's internal expectations and that the watch's sell-through was higher than the original iPhone and iPad during those products' launches.

For the three month period between April and June, Apple's segment for other products -- the part of its balance sheet where it's including smartwatch sales -- tallied $2.6 billion in revenue. That's up from $1.7 billion in revenue in the year-ago quarter, with much of the growth coming from the Apple Watch. What's more, Cook pointed out that "other" products also includes things like the iPod and accessories, which are seeing shrinking sales. Disputing reports that the watch had seen an initial burst of sales only to decline as the quarter went on, Cook said the watch saw its strongest sales in June, as supply caught up with demand and the Apple Watch went on sale in Apple's retail stores.

Still, Cook and Apple seem more interested in where the Apple Watch is headed than where it is right now. The watch is currently on sale in 19 countries; Apple expects to add three more markets by the end of this month. There are 8,500 third-party apps available for the watch; Apple expects app makers to continue to develop for the watch with the arrival of WatchOS 2 and its support for native apps later this fall.

Native apps will be able to access sensors like the Apple Watch's heart rate monitor, accelerometer and taptic engine, which could mean a different class of apps than current ones that basically serve as extensions of the apps running on your iPhone. To that end, Apple's internal research indicates that the most popular third-party apps on its watch are social networking tools like Twitter, Line and WeChat.

That same internal research from Apple also indicates that 94 percent of people with an Apple Watch wear the device regularly, Cook said.

The Apple Watch's potential is of particular interest to Apple, given the state of the tech giant's other businesses. While Mac sales continue to show solid growth -- revenue was up 9 percent year-over-year for the quarter -- that's amid an overall decline for the PC market. iPad sales were less encouraging, falling 23 percent from last year's third quarter. Apple's record quarter largely came from its booming iPhone sales, a 59 percent jump in revenue from last year. The company would like another product to help fuel its growth, and it sees an opportunity with the Apple Watch and its many uses.

That's why Apple executives were more interested in talking up the watch's future during today's earnings call. "We plan to expand channel before the holiday because we’re convinced that the watch will be one of the top gifts of the holiday," Cook said.