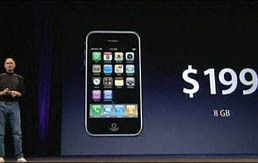 So far, AT&T has been believed to subsidize the iPhone 3G with a $200, amount typical for most smartphone deals between device manufacturers and carriers. In a previous article, we described how such a deal could work out for both Apple and AT&T.

In a new development, Oppenheimer equity research analyst Yair Reiner said that the carrier subsidy could be as high as $325. If correct, this would mean that AT&T is paying $525 for each iPhone 3G ($200+$325), instead of the previously estimated $400.

However, the carrier will make $480 more over the course of two-years contract than with the first iPhone. It will collect $240 by not sharing service revenue anymore with Apple (it was estimated Apple was collecting about $10 a month from each iPhone subscriber) and another $240 by slapping a $10 a month premium on the unlimited 3G data plan. So, even if AT&T subsidizes the iPhone 3G with $325, it will make an additional $480 in service revenues over the course of the first two years alone, if the analyst estimates are correct.

Reiner told his clients that the unusually high subsidy shows just how much the AT&T is confident that the iPhone 3G will grow its subscriber base. Besides, iPhone customers are more lucrative as well. AT&T mentioned that an iPhone customer generates twice the revenue of a traditional cellphone customer, which would mean that the average monthly revenue per iPhone customer is in the $105 range.

Other smartphone makers, however, can’t expect similar high subsidies - not from AT&T and not from any other carrier. The problem with Apple’s rivals is that they still don’t have a blockbuster product that promises to drive carrier’s subscribers base and increase its service revenues. The fact that the iPhone remains the only product that can do that could mean that companies such as Nokia and Research in Motion will have to "scramble" to hit lower price points at the expense of their bottom lines, Reiner said.

The analyst has also raised interesting questions about iPhone purchase scenarios. Reiner believes that AT&T is paying Apple an additional $100 for each new customer who signs sign a two-year contract inside an Apple Store. The analyst noted that even in such a case, AT&T would still be paying Apple a $325 subsidy on iPhone 3Gs sold in the Apple Stores.

The fact that Apple receives $100 for selling AT&T’s service contract isn’t out of the ordinary. Any other retail store is entitled to get a fixed fee for selling service contract from any other carrier. When you think of it, it seems that buying the iPhone 3G in an Apple store is the most expensive scenario for AT&T. It ends up being a $625 phone for AT&T and even if you count in that the carrier gets $199 for the device and $36 for the activation, this phone remains an expensive product for AT&T.

No doubt, the new agreement will bring lots of cash for Apple. AT&T already said that the investment into the iPhone 3G will cut into its profit margins and earnings this and next year, costing the company about 10 to 12 cents per share. The company estimates that the handset will begin adding to its profits by 2010: "We expect iPhone 3G will spur demand, boost adoption of data services, and attract high-value customers," AT&T chief financial officer Rick Lindner said.