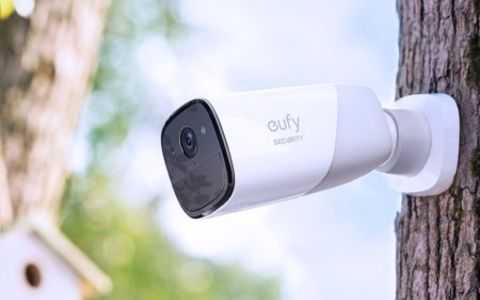 While it offers good video quality and effective facial recognition, this crowd-funded camera is not yet ready for prime time.

The Anker EufyCam was first announced on Kickstarter, where more than 8,800 backers were impressed enough with the promised specifications and functions to pledge $3.1 million in support of the security camera. Currently, the camera is available ($499, includes two cameras and a base station) through an exclusive deal with Walmart, as well on Eufy’s site.

Unfortunately, the EufyCam was rushed to market too quickly. Important functions, such as cloud storage, motion zones and Smart Home integration were not yet available at the time of my testing. For now, we'd check out the Arlo Pro 2 or other devices on our best security camera list. Still, the EufyCam has a great deal of promise.

Editor's Note (March 2019): Since our original review, the EufyCam now supports cloud storage, and in April, the company plans to add motion detection and geofencing. We will update the review, and reserve the right to change the rating, once we've had a chance to test those features.

The wireless indoor-outdoor EufyCam is a low-profile, oblong device with a black, 2.25-inch-square face and a curved, white 4.25-inch body. Night vision is provided by two infrared LEDs on either side of the lens. The microphone is just below the lens, and the speaker is on the bottom, near the front. The Eufy is sealed against the elements and has an IP67 weatherproof rating.

Anker claims that the camera will run wirelessly for a full year on its built-in 13,400-mAh Li-ion battery. The nonremovable battery may be charged by plugging the camera into the home base via the supplied 5-foot USB cord. Or, you can power the camera via an electric outlet, using the cord and a 5-V or 9-V USB power adapter. (The adapter isn't included.)

Two stands are included in the box, both of which make it easy to position the camera: a 1.8-inch dome by 1.3-inchtall magnetic base and a 2.3-inch-tall screw-in base that has a 2.1-inch-square bottom.

Similar to Arlo's wireless cameras, the EufyCam transmits its feed to a home base that's connected to your Internet router. An internal backup battery will supposedly keep the home base running for 48 hours if there's a power outage, and the device can support up to 16 cameras and 34 sensors (related to other Eufy devices). A 16GB microSD card comes inserted into the rear of the home base for local storage; you can replace it with a larger-capacity microSD that's up to 128GB.

The 100-decibel siren (on both the home base and the camera) can be set to blare when motion is detected. In addition, moving the camera without first disarming it will set off the siren. Digital security includes AES-256 encryption for your account information and AES-128 encryption for your local storage. Video streams, images and firmware updates are encrypted. For further security, images and videos on the microSD card can be read only when inserted in the home base.

The EufyCam's 1/2.7-inch CMOS sensor and glass lens capture 1080p video over a 140-degree field of view. The quality of my indoor and outdoor test videos was nearly on a par with the Arlo Pro 2.

Both the indoor and outdoor night videos were blurred, with greater loss of detail and pixelization outdoors than indoors. On the other hand, the exposure was good, even in a very dark room.

Though the two-way audio is only half-duplex — you can't talk and listen at the same time — I had no difficulty conducting a conversation with a person standing in front of the camera while I was looking at them through a feed on my smartphone. The sound was loud and clear in both directions. Recorded audio was similarly loud and clear, but it lagged behind the video.

You can set different alerts when the EurfyCam detects motion: record video, send a push notification and/or trigger the 100-db siren on the camera and/or the home base. Unfortunately, you can't create an alert when the camera hears something.

Scheduling is flexible and logical, allowing several time periods, each of which may be set for several select days at once. That makes it relatively easy to create an overnight active period.

You can adjust the sensitivity of the motion detection to help limit false alerts. Though the levels are designated by meaningless numbers (0 to 75), there's a convenient test mode that can help you find your preferred setting by making a red light on the camera blink when it detects motion. You can't turn off that red light, though, which tends to make the camera more noticeable to an intruder.

The Eufy uses the home base's AI (rather than passive infrared detection) to supposedly distinguish between humans and animals. However, in my tests, I received numerous false alerts when my medium-size dog Shayna walked through the camera's field of view.

The app has intelligent facial recognition. Take a headshot or upload one, and the image will be saved in your Familiar Faces to help identify friends in video clips. In addition, when a person triggers a motion-detection alert, the push notification to your phone will include a screen grab of that person's face. In my tests, this worked most of the time, as long as the person was facing the camera.

Since the EufyCam typically runs on battery power (though you can use the USB power cord), you have two working modes. Optimal Battery Life mode restricts each event video o only 20 seconds or less and limits the frequency of alerts to save on battery life. Optimal Surveillance mode records up to 60 seconds of video, and the camera will start a recording as soon as it detects motion, even if that event occurs immediately after a previous recording. The app states that if you use this mode in a high-traffic area, it would be advisable to use the USB cord to power the camera.

Recorded videos are organized by date, using a sliding linear calendar. Each clip is identified with a thumbnail, the time of capture and the name of the camera. In my tests, an icon indicating that a person was detected was often (but not always) replaced by the headshot of a registered, known person or of a stranger the camera saw. The headshot will also be included in the video's playback.

No cloud storage is currently available, though a spokesperson said they expect it to be implemented in mid-2019.

The mobile app (Android 4.4 or above, iOS 8.0 or above) is generally well-organized and comparatively easy to understand and navigate, with direct access to the Events Library of video clips from just about every screen, including the Live View.

In addition, the icons on the app's Live View provide immediate control over two-way audio, the siren and camera settings, and create a screen grab or video capture. Live View's autorotate feature (according to the orientation of your phone) is nicely responsive.

Unfortunately, Anker limits your account to a single login, which means that only one family member at a time may check your cameras and videos.

As with many other functions, Eufy's web portal wasn't available for public use at the time of my testing. It's supposed to be implemented in the first quarter of 2019.

At present, EufyCam has no Smart Home integration. Alexa and Google Assistant support are on the road map for the first quarter of 2019.

The Eufycam has been available for sale since December 2018; however, as of this writing, it was still a work in progress. Though its video is on a par with the Arlo Pro 2, and local storage options, facial recognition and other currently available functions work well, too many important features are not yet available. Cloud storage, geofencing, a web portal and support for Alexa and Google Assistant won't be introduced until mid-2019, and motion zones and audio detection aren't even on the road map.

In other words, the EufyCam isn't ready for prime time. When and if those promised functions are added to the EufyCam, we will retest it; we reserve the right to change the rating of this review at that time. Until then, we recommend the Arlo Pro 2.