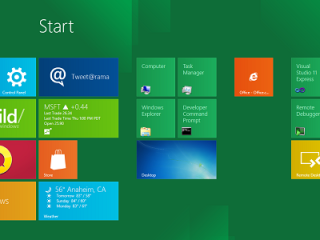 How using the Metro Start screen makes you work

There are plenty of technical improvements coming in Windows 8 that you can already see in the Developer Preview, from faster boot times to Windows Update not harassing you (like when you’re downloading something on an expensive mobile broadband connection). But Windows 8 also introduces the Metro-style Start screen and Metro applications that run - full screen or side by side - without any sign of the familiar Windows desktop.

This move away from the Start menu, something that’s been around since Windows 95, is controversial and the debate over its merits continues unabated on the official Building Windows 8 blog. How well does the combination of interfaces in Windows 8 actually work in practice, for daily use rather than dipping in and out?

According to a survey this week, 42% of consumers would rather buy a tablet running Windows than Android (or an iPad). The Metro-style Start screen, like the Start screen on Windows Phone, is certainly designed for them. On a touch screen, swiping through the list of tiles is fast and easy and the tiles are easy to touch quickly. Until we get to try out the other neat interface ideas that aren’t in this version – like zooming out to fit more icons on screen – that’s not much of an advantage over using an Android tablet or an iPad – but the keyboard is a definite improvement over most of the competition.

You don’t have to find a table or even sit down to type. The split keyboard is at the sides of the screen where your thumbs can easily reach when you hold a tablet in both hands (in landscape mode). It’s not perfect; you have to switch to the numeric keyboard to get the tab button – presumably because you can always tap on screen to move to the next field – but that means moving your thumb away from those carefully-positioned keys. The good news is there will be several keyboard layouts, and third-party keyboards like Swype should be available as well.

Next Page Tiles for staying ‘live’