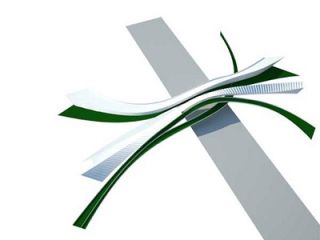 Anybody who has been to Los Angeles or knows somebody who frequently commutes in the area can attest to the traumatically painful amount of road rage and traffic congestion. It may not be the only city in the world with these problems, but the Paris-based Odile Decg and Benoit Cornette Architects (OBDC) have received some attention for their possible solution.

With Los Angeles county estimated to provide up to $40 billion in local transit projects in the next 30 years, ODBC's new transport solution gives a refreshing look at a possible future of Los Angeles transport systems. Their concept consists of several new freeways and bridges used in conjunction with specially designed vehicles that can be driven in their own designated lanes. These vehicles will also have several parking stations located throughout the city. Although the introduction of new vehicles isn't too drastic a solution, the concept provides an interesting new infrastructure for public transportation. Perhaps these vehicles will become a sort of midway point in the chain of transportation between public transits and personal vehicles. At the heart of their project, ODBC hopes to inspire some examination into utilizing existing infrastructures and improving on them rather than creating a new radical transport system.