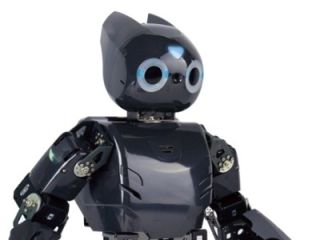 As much as robots would like to take over the planet, the exorbitant costs and build times associated with making one are just too restrictive. Even with death lasers and flesh-ripping blades, if we outnumber them a hundred to one, we still have a chance.

The Robotics and Mechanisms Laboratory (RoMeLa) of Virginia Tech plan to change all that. Their humanoid robot, DARwin-OP, is taking the Linux route of mass production: Going open source. You can get the schematics and operating system online, and in theory build your own version without paying a single cent -- aside from parts, that is.

Alternatively, you can approach Virginia Tech's partner Robotis and purchase a ready-made cat-eared mini-mech for $12,000 ($9,600 with an educational discount). Pricey, but in terms of research robots, that's still cheaper than its closest competitor, Aldebaran Systems' Nao.

Just like any open-source platform, DARwin-OP has one more thing up its metallic sleeve: it's highly customizable. You can pimp it out any way you choose, like giving it stronger legs or laser death hands. Yeah, that's going to turn out well for humanity.