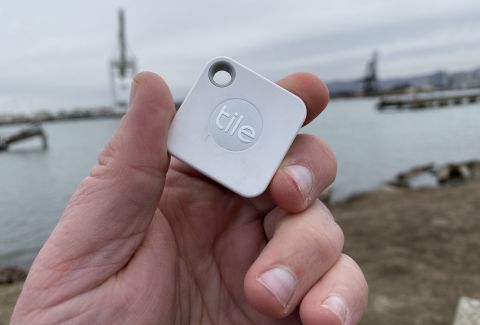 The Tile Mate remains a decent tracker for the price, but there aren't many improvements over last year’s model, and the Tile Pro is a better buy.

With the $25 Tile Mate, the question has always been whether to give up the longer range and louder alarm of the $35 Tile Pro in exchange for a lower price. In the past, the debate has been heated over the trade-off, but with the latest version of the Tile Mate, it's no longer in doubt. The Pro is the better key finder to buy, even if it costs $10 more.

The Tile Mate remains a good tracker for its price. But the promised improvements in this latest version simply aren't in evidence in everyday use. Other Tile trackers, like the Pro and Tile Slim, have moved forward. At best, the new Tile Mate has stayed in place and even taken one step back in a crucial area.

If you're familiar with past Tile Mates, you'll recognize this year's model. It's the same 1.4 x 1.4 x 0.24-inch design with an all-white front save for a silver Tile logo in the middle. Double press the logo and you'll trigger a two-way find feature that will sound an alarm on your phone — which is helpful if you've misplaced your handset.

Tile introduced a replaceable battery to the Mate in 2018, and that feature returns in this year's model — I guess. I say that because I haven't been able to open the tray that holds in the replaceable CR1632 on either Tile Mate model that I've tested. This wasn't an issue with the previous Mate, and I'm able to replace the battery on this year's Tile Pro. When I contacted Tile about the problem, the company conceded that it requires additional force to open the first time, but that it should open if you slide with enough force — try telling that to my aching thumbs.

Tile Mate: How it performs

Just as the design of the Tile Mate hasn't changed, neither has its functionality. You attach the square tracker to your keys (or whatever else you want to keep tabs on). The key finder connects to your phone over Bluetooth, and from a Tile companion app (Android, iOS), you can make the tracker buzz if your keys are ever out of sight, helping you pinpoint their location.

This new version of the Tile Mate has a wider promised range, up to 200 feet, or 50 feet more than last year's model. Unfortunately, I never got close to that 200-foot limit when I tested the new Tile Mate in a public park. That's not unusual — key finders seldom deliver on their promised range, owing to the vagaries of interference from physical structures and other signals. But the range I typically got from the new Mate — 80 to 90 feet in best-case scenarios — is exactly what I got from last year's Mate. When I did lose a signal, at least the Mate was usually quick to re-establish a connection with my phone after I had walked 15 feet or toward the tracker.

The Mate has a loud alarm — about the same volume as the Tile Slim — so hearing it isn't a problem. I buried the Tile Mate under a pile of laundry and could still hear the alarm from within the room, though it did grow fainter when I moved to the next room. Leaving the Tile Mate on the couch in my living room, I could still hear it from my daughter's room more than 30 feet and two doorways away.

Tile offers an optional service called Tile Premium for its key finders. For $3 a month, or $30 annually, you'll get smart alerts, which send a notification to your phone if you leave your keys at a designated location like your home or office. You also get a location history, which can help you if you've lost your keys, and other perks such as an extended warranty, free battery placement, unlimited sharing with family members and premium customer support. If the smart-alerts feature were a little smarter, the Tile Premium would be an easier sell, but the notifications usually arrive when you're too far away to turn back (especially if you walk or use public transit). You can get a lot of use out of your Tile Mate without ever subscribing to Tile Premium.

The Tile Mate used to be a nice way to save money on your key tracker, as its features were comparable to the more expensive Tile Pro. But with the tracker's range not really improving with this year's model and the battery being very difficult to replace — at least in my experience — the Tile Pro is a much better option. It's worth the extra $10 over the Tile Mate if you're in the market for a key finder or are wondering if you should upgrade from an older Mate that still has a non-replaceable battery.